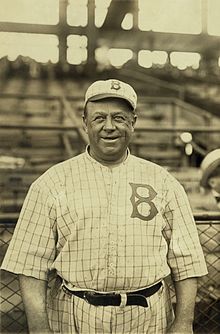 Wilbert Robinson would not don the manager’s cap again in the majors until 1914, when he took over the Brooklyn, New York franchise in the National League. The team was known by various nicknames, including Bridegrooms, Superbas, and Dodgers, but during Robinson’s managerial tenure, which lasted until 1931, the club was as often referred to as the “Robins” in honor of their manager, who had acquired the nickname “Uncle Robbie.”