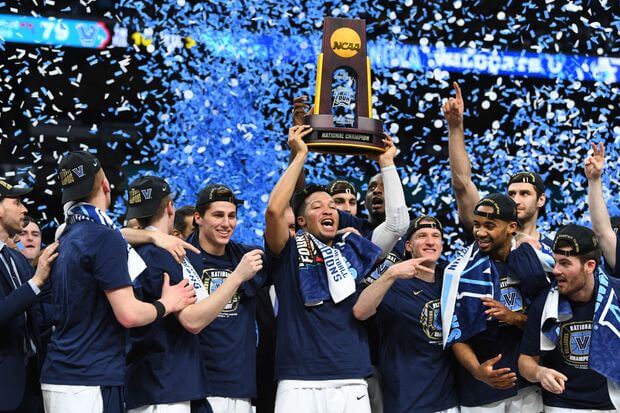 Villanova, Michigan, Kansas, and Loyola-Chicago, the “Cinderella team” of the tournament, reached the Final Four. Villanova defeated Michigan in the championship game, 79–62.

In the Final Four, Villanova defeated Oklahoma, while North Carolina defeated Syracuse (the “Cinderella team” of the tournament). Villanova then defeated North Carolina to win the championship on a three-point buzzer-beater by Kris Jenkins. Pundits called the game one of the best in tournament history, going on to say this was one of the most competitive finals ever.

Eighth-seed Villanova, coached by Rollie Massimino, won their first national title with a 66–64 victory in the final game over Georgetown, coached by John Thompson. Ed Pinckney of Villanova was named the tournament’s Most Outstanding Player. The game often cited as “The Perfect Game”, is widely considered among the greatest upsets in college basketball history, and is the second biggest point-spread upset in Championship Game history. This Villanova team remains the lowest-seeded team to win the tournament. The Wildcats are also notable as the last Division I men’s national champion to date to represent a school that did not sponsor varsity football at the time of its title (Villanova had dropped football after the 1980 season and did not reinstate the sport until the 1985 season, the first after the championship game). The game is also notable as the last played without a shot clock.