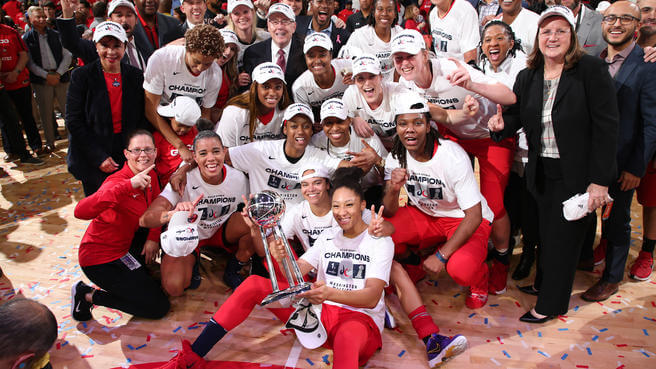 Meesseman returned in the 2019 WNBA season, and her return powered the Mystics towards achieving an unprecedented regular-season record of 26–8, leading the entire league in total wins and losses and earning them the top spot in the playoffs. With a dogged determination to come back to the Finals and high hopes that a Finals title would, at last, be within their grasp, the Mystics began their playoff run skipping the two single-elimination rounds to a semifinal series against the Las Vegas Aces, just more than a year after Washington and Las Vegas’s NHL teams, the Capitals and the Golden Knights, competed in the 2018 Stanley Cup Finals with the former emerging victorious. The Mystics held off the Aces on the first two home games for an insurmountable 2–0 series lead, before finishing them off in Game 4 after the Aces made a desperate bid to extend the series with a Game 3 defeat. The Mystics then returned to the Finals against the Connecticut Sun, a team that had the second-best record in the regular season that was no less hungry for a championship, having come to a win short of one before. This time, the Mystics prevailed through five intense games, by winning the odd-numbered ones and losing the even-numbered ones, with the availability and health of playoffs MVP Elena Delle Donne becoming a crucial factor in the outcome. The Sun was able to tie the series twice by exploiting Donne’s early exit in Game 2 due to a back injury, then drawing upon unrelenting resolve and willingness to learn from mistakes after a Game 3 loss to deny the Mystics an opportunity to close the series early on their home court. The Mystics finally earned their first-ever championship by erasing multiple deficits in the final tiebreaker game, before breaking through in the crucial final quarter to hold on to an 89–78 victory. Meesseman was honored as the Finals MVP.