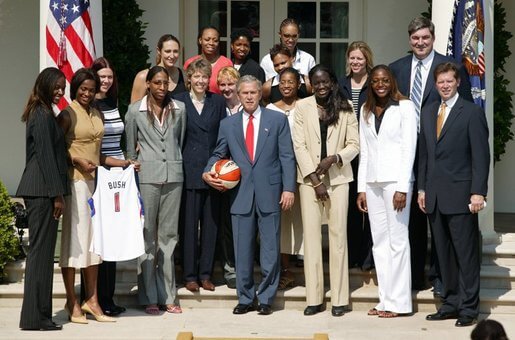 After massive changes to the roster, Laimbeer predicted before the 2003 season that the Shock would be league champions, and his prediction would unbelievably come true. The Shock would tear up the East in the regular season, posting a 25-9 record and winning the #1 seed by 7 games. In the playoffs, the Shock would defeat the Cleveland Rockers 2-1 for their first playoff series win in franchise history. In the Conference Finals, the Shock swept the Connecticut Sun 2-0 to reach the WNBA Finals. Despite the achievements, the Shock was viewed as huge underdogs to the two-time defending champion Los Angeles Sparks, who were looking for a three-peat. The Shock would emerge victorious in the series, winning a thrilling Game Three 83-78. That game would draw the largest crowd ever in WNBA history (22,076 came to watch). Detroit, much like the 1991 Minnesota Twins in baseball, became the first team in WNBA history to make it from the last place one season to WNBA champions the very next season.