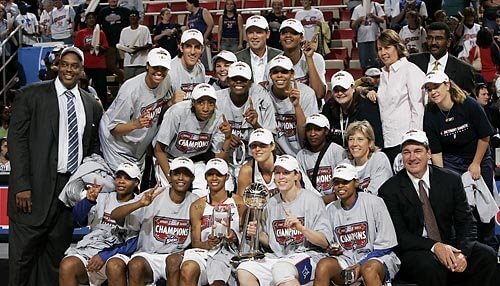 The 2006 Shock came out hungry and poised for a playoff run. The Shock performed well during the regular season, posting a 23-11 record and winning the #2 seed in the playoffs. The Shock went on to make quick work of the Indiana Fever, sweeping them in the first round. In the Conference Finals, the Shock would be matched up against the Sun. This time, the Shock emerged victorious from the hard-fought series, winning it 2-1. In the Finals, which were now best-of-five, the Shock faced the defending champion Sacramento Monarchs. The Shock lost game 1, getting handily defeated 95-71 at home. The Shock rallied in game 2 to even up the series 1-1. Going to Sacramento, the Shock were defeated in Game Three 89-69. With their backs against the wall, the Shock dominated the Monarchs in game 4, 72-52, setting up the crucial Game 5 in Detroit. At halftime in game 5, the Shock would find themselves down 44-36. However, in the third quarter, the Shock would outscore the Monarchs 22-9, gaining a 58-53 lead going into the final quarter. The Shock held off the Monarchs in the last quarter and win the game 78-73, and the championship 3 games to 2. They became the first WNBA team to win non-consecutive championships and to win the Finals after being down 2 games to 1. They also were involved in the first WNBA Finals to go 5 games.