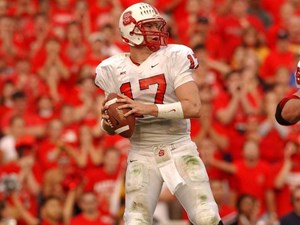 In 2002, Rivers led the Wolfpack to victories in their first nine games. It was the best start in the school’s history. The season took a disappointing turn however when they lost three consecutive ACC contests, but NC State defeated Florida State by a score of 17–7 in their season finale and received an invitation to play against Notre Dame in the Gator Bowl. Once again, Rivers delivered an MVP performance in the most important game of the year, pacing the Wolfpack to a dominating 28–6 win over Notre Dame. In the victory, Rivers was 23-of-37 for 228 passing yards and two passing touchdowns. The game would set up a remarkable year for Rivers in 2003.

As a senior in 2003, Rivers threw for 4,491 yards and 34 touchdowns in 12 games, capping his career as the most productive and durable quarterback in ACC history. The season started with a 59–20 victory over Western Carolina where Rivers had 320 passing yards and three passing touchdowns. The Wolfpack suffered their first loss of the season in the next game at Wake Forest despite Rivers throwing for 433 yards, three touchdowns, and two interceptions. In the following game, a loss at Ohio State, he had 315 passing yards, four touchdowns, and two interceptions. After a win over Texas Tech the following game, he passed for 423 yards and a touchdown in a victory against North Carolina. In the second half of the season, Rivers strung together three consecutive games with great passing performances. He had 369 yards, one touchdown, and one interception in a victory over Duke. The next game, he had 410 passing yards and four touchdowns in a victory over Virginia. Lastly, he had 422 passing yards and four touchdowns in a loss to Florida State. Rivers’ time at NC State had a great ending, leading the Wolfpack to a 56–26 win over Kansas in his third Tangerine Bowl. In the victory, he threw for a career-high 475 yards and five touchdowns. Philip earned his fourth straight bowl MVP award. At the end of the season, Rivers was named ACC Player of the Year for the 2003 football season and ACC Athlete of the Year for 2003–04. He was considered a Heisman candidate during the season, but he was not invited to the Heisman Trophy presentation.

During his collegiate career, Rivers shattered almost every NC State and ACC passing record. He started 51 straight games and completed a conference record of 1,147 passes in 1,710 tries, with 95 touchdowns. His career culminated with an NCAA record 51st consecutive college start. The Wolfpack went to four consecutive bowl games under the leadership of Rivers, winning three of them. Rivers finished his career at NC State with 13,484 passing yards, 13th all-time among Division I quarterbacks (he finished in second place at the end of his collegiate career). He also threw 95 touchdown passes, which tied him for eighth all-time with Kliff Kingsbury and Brady Quinn. Rivers’ number was retired before his final home game at North Carolina State.