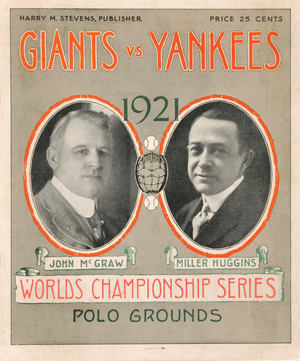 The much-anticipated 1921 World Series featured John McGraw’s New York Giants, dedicated practitioners of the dead-ball era’s “inside game”, and the New York Yankees, who relied on the “power game” exemplified by Babe Ruth, who was coming off of what was arguably his best year ever statistically. The Series was a closely contested matchup which ended on a double play featuring a base running miscue.