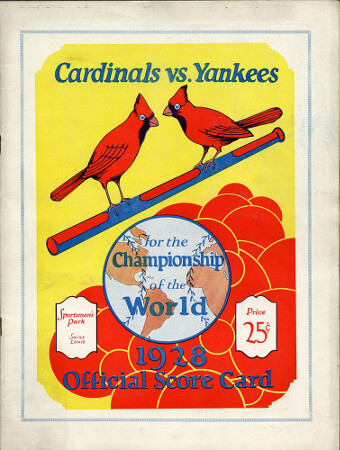 World Series – 1928
In the 1928 World Series, the New York Yankees swept the St. Louis Cardinals in four games. This was the first time a team had swept consecutive Series. Babe Ruth hit .625 (10 for 16) as the Yankees demolished their opponents by a combined score of 27 to 10. As he had done against the Cards in the 1926 Series, Ruth rocketed three home runs over the right field pavilion in Sportsman’s Park in Game 4, the only one to do it twice in the World Series through the 2014 season. Unlike 1926, however, it occurred in the final game of a Series won by the Yanks and put an exclamation mark on their two consecutive World Series sweeps.

World Series – 1927
In the 1927 World Series, the New York Yankees swept the Pittsburgh Pirates in four games. This was the first sweep of a National League team by an American League team. That year, the Yankees led the American League in runs scored, hits, triples, home runs, base on balls, batting average, slugging average and on-base percentage. It featured legends Babe Ruth and Lou Gehrig at their peaks. The team won a then-league record 110 games, finished with a 19-game lead over second place, and are considered by many to be the greatest team in the history of baseball.

World Series – 1923
In the 1923 World Series, the New York Yankees beat the New York Giants in six games. This would be the first of the Yankees’ 27 World Series champibonships (as of 2014). The series was not played in a 2–3–2 format; the home field alternated each game.