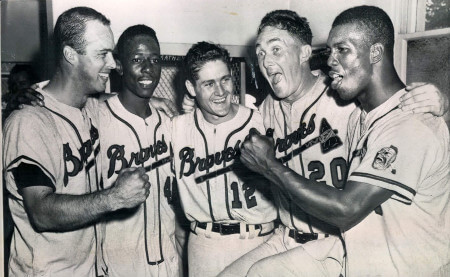 The 1957 World Series featured the defending champions, the New York Yankees (American League), playing against the Milwaukee Braves (National League). After finishing just one game behind the N.L. Champion Brooklyn Dodgers in 1956, the Braves came back in 1957 to win their first pennant since moving from Boston in 1953. The Braves won the Series in seven games, behind Lew Burdette’s three complete game victories, and became the first team to win a championship after relocating.