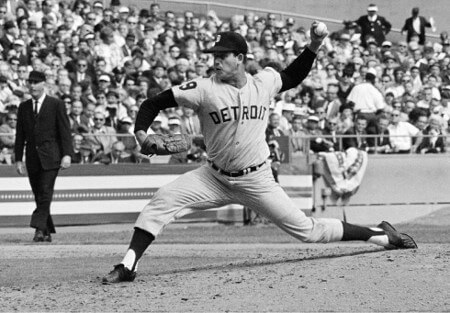 The 1968 World Series featured the defending champion St. Louis Cardinals against the Detroit Tigers, with the Tigers winning in seven games for their first championship since 1945, and the third in their history. The Tigers came back from a 3-1 deficit to win three in a row, largely on the arm of MVP Mickey Lolich, who won three complete games in a single World Series, a feat that has not been duplicated since. In his third appearance in the Series, Lolich had to pitch after only two days rest in the deciding Game 7, because regular-season 31-game winner Denny McLain was moved up to game 6 also on two days rest. In Game 5, the Tigers’ hopes for the title would have been very much in jeopardy had Bill Freehan not tagged out Lou Brock in a home-plate collision when Brock elected not to slide and went in standing up.