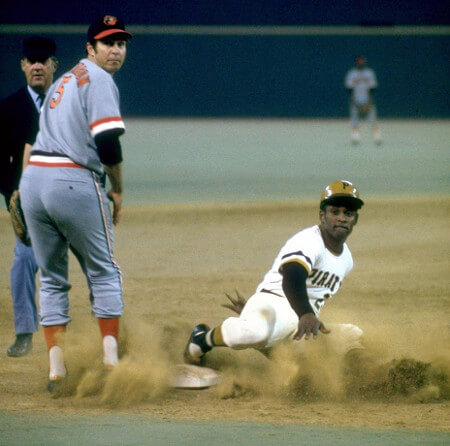 The 1971 World Series matched the defending champion Baltimore Orioles against the Pittsburgh Pirates, with the Pirates winning in seven games. Game 4, played in Pittsburgh, was the first-ever World Series game scheduled to be played at night. The two teams proved to be evenly matched, as the Series went the full seven games, with the Pirates’ Steve Blass pitching a complete game four-hitter in winning Game 7, 2–1, against Mike Cuellar and the Orioles. The Pirates’ Roberto Clemente, who turned into a one-man gang in the Series, became the first Spanish-speaking ballplayer to earn World Series MVP honors. Clemente hit safely in all seven games of the Series, duplicating a feat he had performed in 1960.