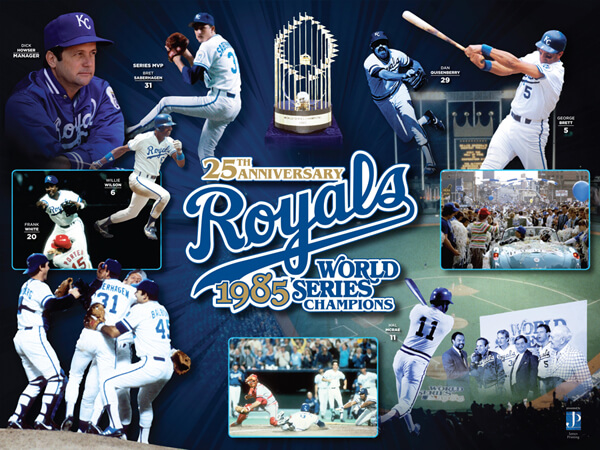 In the 1985 World Series against the cross-state St. Louis Cardinals (nicknamed the “I-70 Series” because the two teams are both located in the state of Missouri and connected by Interstate 70, the Royals again fell behind 3–1. The key game in the Royals’ comeback was Game 6. Facing elimination, the Royals trailed 1–0 in the bottom of the ninth inning, before rallying to score two runs and win. The rally was helped by a controversial safe call at first base by umpire Don Denkinger, which allowed Royals outfielder Jorge Orta to reach base safely as the first baserunner of the inning. However, the Royals gave this out back later when Orta was thrown out at 3rd after a botched sacrifice bunt. Following Orta’s single, the Cardinals dropped an easy popout and suffered a passed ball, before the Royals went on to win with a bloop base hit by seldom used pinch hitter Dane Iorg. Following the tension of Game Six, the Cardinals pitching and defense came undone in Game 7 and their offense was shut down by Saberhagen leading to the lowest batting average to date (.188 by the Cardinals, later broken by 2001 Yankees) and fewest runs (13 for the Cardinals, still stands) of any team in a 7 game series, and the Royals won 11-0 to clinch the franchise’s only World Series title. The Royals are the only team to win a 7-game League Championship Series and a 7-game World Series in the same year.