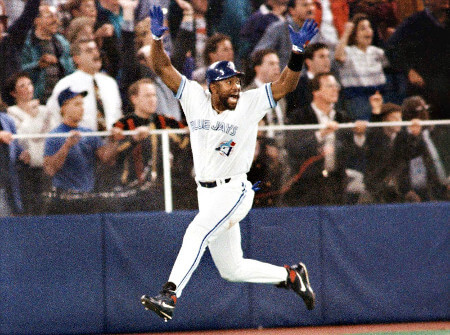 The 1993 World Series was a best-of-seven playoff series to determine the champion of Major League Baseball for the 1993 season. It pitted the defending champion Toronto Blue Jays of the American League against the National League champion Philadelphia Phillies. With Toronto ahead three games to two in the Series, Joe Carter hit a game-winning three-run home run in the bottom of the ninth inning of Game 6 to win the series for Toronto, its second consecutive championship the first repeaters since the 1977 – 1978 Yankees. This was only the second Series concluded by such a home run the first was in the 1960 World Series on a Bill Mazeroski home run for the Pittsburgh Pirates, and the first such occasion where a come-from-behind walk-off home run won a World Series. Larry Andersen was the only member of the 1993 Phillies to also play for them in the 1983 World Series, although Darren Daulton was a late season call-up in 1983, but only served as the bullpen catcher in the World Series. Fittingly, in Daulton’s first ever MLB game, he was a catcher for Larry Andersen.