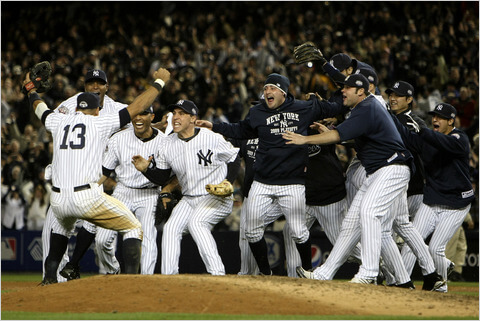 World Series – 2009
The 2009 World Series was the 105th edition of Major League Baseball’s (MLB) championship series. The best-of-seven playoff was contested between the Philadelphia Phillies, champions of the National League (NL) and defending World Series champions, and the New York Yankees, champions of the American League (AL). The Yankees defeated the Phillies, four games to two, to win the franchise’s 27th World Series championship. The series was played between October 28 and November 4, broadcast on Fox, and watched by an average of roughly 19 million viewers.

World Series – 2000
The 2000 World Series, the 96th edition of Major League Baseball’s championship series, featured a crosstown matchup between the two-time defending champion New York Yankees and the New York Mets, with the Yankees winning four games to one for their third straight championship and 26th overall. It marks, to date, the last World Series with a repeat champion. It was the first postseason Subway Series since 1956. The Yankees were in the World Series for the third straight year, fourth in the previous five, and 37th time overall the most of any team in the MLB, while the Mets made their fourth World Series appearance the most of any expansion franchise in the MLB and its first since winning the title in the 1986 World Series.

World Series – 1999
The 1999 World Series, the 95th edition of Major League Baseball’s championship series, featured a match between the defending champions New York Yankees (representing the American League) against the Atlanta Braves (representing the National League) during the month of October, with the Yankees sweeping the Series in four games for their second title in a row, third in four years, and 25th overall. It is remembered for Chad Curtis’ home run in Game 3, which gave the Yankees a 6–5 victory and Game 2, featuring Jim Gray of NBC’s infamous interview with Pete Rose.

World Series – 1998
The 1998 World Series, the 94th edition of Major League Baseball’s championship series, matched the New York Yankees (representing the American League) against the San Diego Padres (representing the National League). The Yankees swept the Series in four games to capture their second championship in three years, and their 24th overall. It was San Diego’s second World Series appearance, and the first since losing in 1984 to the Detroit Tigers. This was officially the first World Series that Bud Selig presided as Commissioner of Baseball, although he had presided over the Commissioner’s Trophy presentation at the end of the 1995 and 1997 World Series.