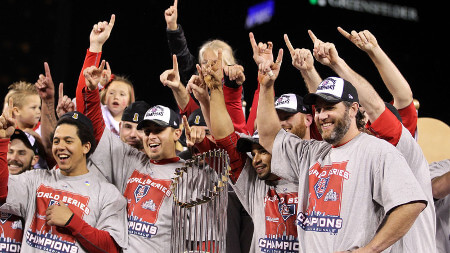 The 2011 World Series was the 107th edition of Major League Baseball’s championship series. The best-of-seven playoff was played between the American League champion Texas Rangers and the National League champion St. Louis Cardinals, with the Cardinals defeating the Rangers in seven games to win their 11th World Series championship. The Series was noted for its back-and-forth Game 6, in which the Cardinals erased a two-run deficit in the bottom of the ninth inning, then did it again in the 10th. In both innings, the Rangers were one strike away from their first World Series championship. The Cardinals won the game in the 11th inning on a walk-off home run by David Freese. The Series was also known for the blowout Game 3, in which Cardinals player Albert Pujols hit three home runs, a World Series feat previously accomplished only by Reggie Jackson and Babe Ruth, and subsequently only by Pablo Sandoval (in 2012). The Series began on October 19, earlier than the previous season so that no games would be played in November. The Cardinals enjoyed home-field advantage for the series because the National League won the 2011 All-Star Game 5–1 on July 12. The 2011 World Series was the first World Series to go all seven games since 2002.