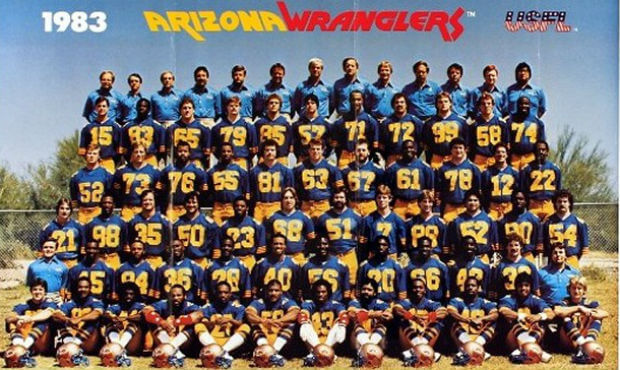 The team that would eventually become the Arizona Wranglers was originally supposed to be the USFL’s Los Angeles franchise. The team’s planned original owner, Alex Spanos, pulled out of his USFL commitment and instead bought a minority stake in the NFL’s San Diego Chargers.

The owners of the Oakland Invaders, Bay Area real estate executives Jim Joseph and Tad Taube, flipped a coin to decide who would take action to become the new owner of the USFL’s Los Angeles franchise. Joseph won the flip and got the USFL rights to Los Angeles, while Taube retained full ownership of the Invaders.

A few months later, fate shuffled the deck. The owners of the USFL’s San Diego franchise, cable television pioneers Bill Daniels and Alan Harmon, could not secure access to Jack Murphy Stadium in San Diego. (The USFL would never be able to successfully negotiate a lease to the Chargers’ home stadium, a situation that would force a second USFL team, the Outlaws, to leave San Diego for another city before playing a down.)

USFL officials felt that Daniels and Harmon’s ties to the cable industry would be better suited for the country’s second-largest market. The league forced Joseph to surrender rights to Los Angeles to Daniels and Harmon, whose franchise became the Los Angeles Express. Joseph finally settled on a move to Phoenix, bringing professional football to that Arizona city for the first time.