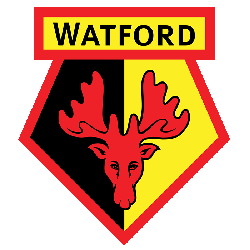 The club recognises its foundation as 1881, aligned with that of its antecedent, Watford Rovers, and was established as Watford Football Club in 1898. After finishing the 1914 - 1915 season as Southern League champions under the management of Harry Kent, Watford joined the Football League in 1920. The club played at several grounds in its early history, before moving to Vicarage Road in 1922.

Graham Taylor's tenure as manager at the club between 1977 and 1987 saw Watford rise from the Fourth to the First Division. The team finished second in the First Division in 1982 - 1983, competed in the UEFA Cup in 1983–84, and reached the 1984 FA Cup Final. Watford declined between 1987 and 1997, before Taylor returned as manager, leading the team to successive promotions from the renamed Second Division[a] to the Premier League for one season in 1999 - 2000.

Nickname
The Hornets
The nickname for Watford was also taken from the colors of their kit, yellow and black – making them ‘The Hornets’. The crest of the club used to have a hornet on it until it was changed to picture a hart, (a male deer) as the county of Hertfordshire, where Watford is, contains many deer.

Who is the greatest Watford FC?