Everyone loves a David v Goliath story and college football is one of the few major American sports that provide them. So often Goliath comes out on top, but on the odd occasion that fans get to see a huge upset and a massive underdog pulls off a sensational upset, it is truly amazing to watch. In this article, we look at some of the best college football upsets in the past 15 years, and with more attention on upsets than ever thanks to the expansion of sportsbooks and US betting sites, we’re hoping for some more in the coming seasons. 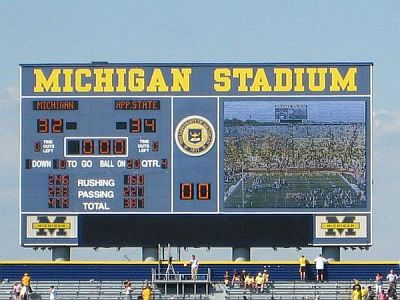 No doubt one of the greatest upsets of them all. We may never see something as incredible as what happened in week one of the 2007 season, and it's all thanks to a small school from the North Carolina mountains. Michigan, ranked number five in the nation, paid the Appalachian State Mountaineers $400,000 for the privilege of playing in Ann Arbor at the Big House in the season opener in the first-ever game to be broadcast on the Big Ten Network. The Mountaineers were a very good team in their own right, coming off the back of back-to-back FCS National Championships, but the Wolverines had never even played someone from that level before and it should have been an easy win at home for Michigan.

At half-time, it had become clear that the easy win wasn’t to be. Michigan had no clue what to do with Mountaineers quarterback Armanti Edwards, and he was shredding the Wolverines' defense, leading his team to a 28-17 lead. The defense did see some improvements in the second half, only allowing six points as the offense clawed it back. Running back Mike Hart gave the Wolverines the lead with 4:36 to spare thanks to a 54-yard rushing touchdown, but App State would bounce back with a clock-chewing drive that got them into field goal range, taking the lead with 26 seconds left on the clock. Michigan thought they’d avoided disaster when quarterback Chad Henne found Mario Manningham for 46 yards to set themselves up for a game-winning walk-off field goal, but instead, we saw a moment in history. Corey Lynch of the Mountaineers blocked Jason Gingell’s attempt to seal the victory for the FCS school, pulling off one of the all-time great sporting upsets. So impressive was the win, the Associated Press made FCS schools eligible to receive votes in the AP Poll from then on.

From an incredible season opener in the 2007 season to an incredible climax in the same year. The Fiesta Bowl wasn’t a huge upset in terms of points spread or margin of victory, but it was the way the Boise State Broncos pulled off their victory against Oklahoma. For many, this is one of the greatest games in the sport’s history due to some of the incredible moments the Broncos served up to prove they could hang with the big boys.

In the final play of regulation, with the Sooners leading 35-28 and the Broncos facing 4th and 18 from midfield, they executed a ridiculous hook and lateral play, with quarterback Jared Zabransky finding Drisan James with a 15-yard strike, who then lateraled it to Jerard Rabb, who ran it in for a touchdown as time expired. In Overtime, legendary running back Adrian Peterson gave the Sooners the lead with a 25-yard run, and the Broncos managed to answer back thanks to backup wide receiver Vinny Perretta, who lined up as a running back with the quarterback motioning out wide. Perretta took the snap, rolled to his right, and then threw a touchdown pass to tight end Derek Schouman to make it 42-41. The Broncos decided to go for two and the win and pulled off one of the greatest trick plays in college football history. Zabransky perfectly pulled off the iconic “Statue of Liberty” play call, faking the entire defense out as Ian Johnson ran into the endzone untouched, sealing an incredible victory. Those three trick plays from the Broncos were all magical in their own right, but to be pulled off one after another was truly awesome.

When LSU paid Troy $985,000 for the privilege of coming down to Baton Rouge for a game in Death Valley for LSU’s homecoming weekend, the expectation was that the Trojans would lose. LSU was on a run of 49 consecutive wins in non-conference home games, a streak dating back to 2000. Troy was 21 point underdogs heading into the game and everyone thought they would become team number 50, but after they forced a fumble on LSU's first offensive snap and scored a quick touchdown, and led at half-time, the upset was well and truly on. They extended their lead to 17 points early in the third quarter, and despite Tigers’ quarterback Danny Etling leading a comeback in the fourth quarter, it wouldn’t be enough and Troy held on for a famous three-point win after a late interception to ice the game. 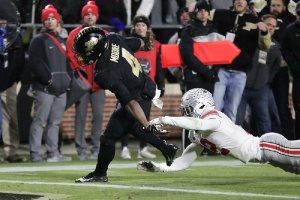 The 2018 Buckeyes were a very strong outfit under Urban Meyer, and in the early stages of the season looked set for a playoff berth.  After starting their season 7-0, a game against the 3-3 Purdue Boilermakers should have been the next win to chalk off, but it didn’t work out that way. Ranked no. 2 in the nation, Ohio State was expected to knock off Purdue quite easily, but they were shocked to their core at Ross-Ade Stadium on the evening of October 20. In truth, it was never even close, and the Boilermakers never trailed once as they pulled off a comfortable 29 point victory, gashing the Ohio State defense for over 500 yards, with star receiver Rondale Moore going off for 170 yards and two touchdowns. It would be the Buckeyes’ only loss of the 2018 season and the reason that they missed out on a College Football Playoff berth.

From massive point spread underdogs, teams with playoff aspirations getting knocked over, winning streaks getting snapped and trick play comebacks, upsets in college football come in all shapes and sizes. They always serve as a reminder that this sport is truly the greatest in the world, and on any given Saturday, magic can happen on the gridiron.