With only a few weeks until the Super Bowl 2022, can Tampa Bay get into the list of back-to-back winners? Only time will tell. To assure you got the right pick, check out FanDuel Super Bowl LVI bets. However, they ended the dream of the Chiefs to be the entrant of back-to-back champions by beating 31-9 in the last season.

No team has ever won the Super Bowl three times in a row. In contrast, eight teams have won it consecutively since the inception of the NFL.

The following are some interesting facts about the NFL Super Bowl:

In a 35-10 victory over the American Football League (AFL) champion Kansas City Chiefs, champion Green Bay Packers of the National Football League (NFL) won the league championship. In the following season, the Packers defeated the Oakland Raiders in a 33-14 match. The wins were not easy as the Packers were on a losing streak before the first Super Bowl. The hiring of Vince Lombardi turned it around for them. In their first win, he signed Fred Thurston and traded three defenders from the Browns – Henry Jordan, Willie Davis, and Bill Quinlan. It was a team effort throughout, and Lombardi’s excellence allowed them to reach the finals.

The second time around was hard as two star players, Paul Hornung and Jim Taylor, left the team, and the Packers were playing with bench strength.  Green Bay dominated the Western Conference Championship Game 28-7, defeating their first playoff opponent, Los Angeles Rams. In one of the most famous games in the history of professional football, Green Bay fought back from behind to beat the Dallas Cowboys in the NFL championship game the following week. 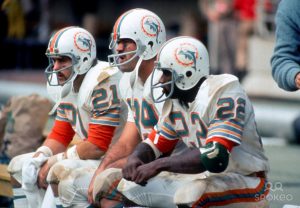 As the first and only team in modern NFL history to accomplish a perfect undefeated season, the Dolphins went undefeated during the 1972 season, defeating the Redskins by 14–7. They achieved this despite losing their starting quarterback. The same season, Earl Morral won the NFL Comeback Player of the Year for carrying the team.

With running backs Larry Csonka, Jim Kiick, and Eugene "Mercury" Morris, the Dolphins still had a potent running attack. It was Miami's first season in which two players had 1,000-yard seasons, as it set a record with 2,960 total rushing yards.

The Dolphins defeated the Vikings and won their second consecutive Super Bowl with a 24–7.

1973 saw the team play such difficult opponents as the Oakland Raiders, the Pittsburgh Steelers, and the Dallas Cowboys. This team gave up 150 fewer points than it did in 1972. While the Dolphins were reliant on their offense, their defense line continued to dominate throughout the season.

The Steelers are the only team to win the Super Bowl consecutively twice. As a result of winning four Super Bowls in six seasons during the 1970s, the Pittsburgh Steelers were regarded as one of the most dominant teams in NFL history. It became one of the greatest teams in the league, like the Bears in the 1940s, the Browns in the 1950s, and the Packers in the 1960s.

Between 1974 and 1979, the Steelers won 80 games, including playoffs, thanks to Terry Bradshaw's stellar arm and the Steel Curtain defensive line, the most of any team during that period.

In 1989, Joe Montana passed to John Taylor for the winning touchdown. It was a close game from start to finish. The key performers that helped the team lift the Super Bowl were Joe Montana, Roger Craig, who won the offensive player of the year award, Tom Rathman, and the defensive line led by Ronnie Lott, Eric Wright, and Jeff Fuller.

It was the second straight year that the 49ers won the Super Bowl, defeating the Broncos by 55–10. A similar dominance was evident as during the previous regular season for the 49ers. Also receiving both the NFL Offensive Player of the Year Award and the NFL Most Valuable Player Award, Montana rushed for 227 yards and three touchdowns. Jerry Rice and John Taylor both had outstanding seasons as wide receivers. And Tom Rathman had his finest season at fullback, backed by the defense.

The Cowboys won their first ring since the late 1970s after dismantling the Buffalo Bills in Super Bowl 27 because of the combination of Troy Aikman, Michael Irvin, and Emmitt Smith.

However, the following season, it took Dallas two games to bounce back from the inevitable hangover of winning a Super Bowl before it cruised to another title and another victory over the Buffalo Bills in the championship game.

The Broncos became the first AFC NFL team since the Steelers to repeat as Super Bowl champions by defeating the Packers and Atlanta Falcons in their respective championship games. Following the Broncos' 34-19 victory in Super Bowl 33, John Elway won the MVP award in his last game as a member of the Hall of Fame. 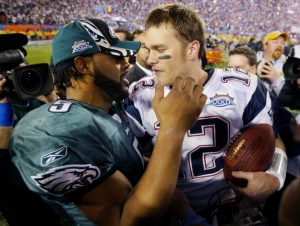 The Patriots defeated the Panthers by a score of 32–29. It's widely acknowledged that this Super Bowl was one of the best-played and most exciting in recent memory. All the players played well including Tom Brady, Drew Bledsoe, Deion Branch, David Givens, David Patten. With 34 receptions for 510 yards and six touchdowns, David Givens was the leading receiver for the Patriots. Troy Brown and Daniel Graham were also key players in the passing game with record performances.

The Patriots beat the Eagles 24-21. As part of their offseason acquisitions, the Patriots acquired veteran running back Corey Dillon. For the fourth time in his career, Dillon was named to the Pro Bowl as a significant offensive weapon for the 2004 Patriots, both career highs. His contributions were instrumental in helping the team win the most consecutive regular-season games, 21 consecutive overall victories, and earned the second-best regular-season record in the league that year.