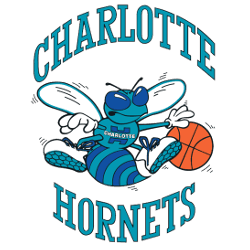 In 1985, the NBA, then at 23 teams, was planning to expand by four teams by the 1988–1989 season. George Shinn, an entrepreneur from Kannapolis, North Carolina, wanted to bring an NBA team to the Charlotte area, and he assembled a group of prominent local businessmen to head the prospective franchise. The Charlotte area had long been a hotbed for college basketball. Charlotte was also one of the fastest-growing cities in the United States, and was previously one of the three in-state regional homes to the American Basketball Association’s Carolina Cougars from 1969 to 1974.

Nickname
Hornets – In 1987, George Shinn and his ownership group announced that Spirit would be the nickname of Charlotte's prospective expansion franchise. Most fans voiced their displeasure, and it didn't help that some fans associated the nickname with the PTL Club, a Charlotte-based evangelical Christian television program that was the subject of an investigative report by the newspaper Charlotte Observer for its fundraising activities. Shinn decided to sponsor a name-the-team contest and had fans vote on six finalists. More than 9000 ballots were cast and Hornets won by a landslide, beating out Knights, Cougars, Spirit, Crowns, and Stars. Afterward, Shinn noted that the nickname had some historical significance; during the Revolutionary War, a British commander, Lord Cornwallis, reportedly referred to the area around Charlotte as a "hornet’s nest of rebellion."

Who is the greatest Charlotte Hornets (Pelicans)?