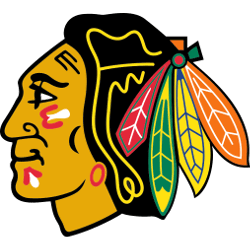 The Chicago Blackhawks (spelled Black Hawks until 1986, and known colloquially as the Hawks) are a professional ice hockey team based in Chicago, Illinois. They are members of the Central Division of the Western Conference of the National Hockey League (NHL). They have won six Stanley Cup championships since their founding in 1926. The Blackhawks are one of the “Original Six” NHL teams along with the Detroit Red Wings, Montreal Canadiens, Toronto Maple Leafs, Boston Bruins and New York Rangers. Since 1994, the club’s home rink is the United Center. The club had previously played for 65 years at Chicago Stadium.

Nickname
Blackhawks – World War I veteran and coffee tycoon Frederic McLaughlin was Chicago’s owner when it entered the NHL in 1926. McLaughlin named the team after the 86th Infantry Division in which he served. The “Black Hawk Division,” was named after Chief Black Hawk of the Sauk American Indian tribe, who fought the Illinois militia in 1832. The nickname was officially changed from Black Hawks to Blackhawks in 1986.

Who is the greatest Chicago Blackhawks?