David Beckham, who is currently the president & co-owner of Inter Miami CF and co-owner of Salford City, started his career in England, playing for Manchester United, Preston North End (on loan), before moving to Spain to join Real Madrid, and then Serie A side A.C. Milan (on loan), before moving to America to join LA Galaxy, and then back to Europe with Paris Saint-Germain. Beckham is the first English player to win league titles in four different countries: England, Spain, the United States, and France. In May 2013, the English man retired after a 20-year career, during which he won 19 major trophies. 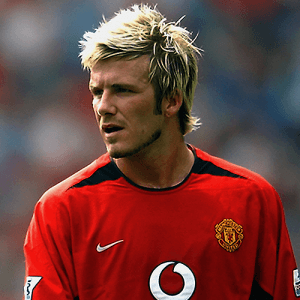 His professional club career started with Premier League side Manchester United, where he made his debut in 1992 at the age of 17 for the first team. At Old Trafford, Beckham won the Premier League title on six occasions, the English FA Cup two times, and the UEFA Champions League in the year 1999. Without a doubt, he had a splendid career at Old Trafford, one filled with a lot of on and off-field events that will last long in the memory of football fans.

On the field, Beckham is known for his passing range, precise crossing ability, and bending free-kicks as a right-wing forward, he has been hailed as one of the greatest midfielders of his generation, and one of the best set-piece takers of all time, he was also said to have created a new Betfair account at the time. He emerged runner-up in the 1999 edition of the Ballon d'Or, as well as twice runner-up for FIFA World Player of the Year

Beckham inherited his love for Premier League side Manchester United, as his parents were fanatical Manchester United fans who frequently traveled as far as 200 miles (320 km) to the home of United Old Trafford from the City of London to attend the United’s home games.

In the early 2000s, Beckham’s relationship with Alex Ferguson begun to deteriorate, possibly because of Beckham's fame and commitments outside of football. In 2000, He was permitted to miss United training to look after Brooklyn, his son, who had gastroenteritis, but then Manchester United manager, Alex Ferguson was angry when Beckham’s wife Victoria was pictured at a London Fashion Week event on that same night, claiming that David Beckham would have been able to train if his wife Victoria had looked after their sick child that day. Ferguson responded by fining the Englishman the maximum amount that was allowed at that time (two weeks' wages – then £50,000) and dropping the midfielder for a crucial game against Leeds United.

The famous boot incident happened following an injury early in the 2002/2003 campaign, David Beckham was unable to regain his spot in the Manchester United squad, with Ole Gunnar Solskjær having replaced the English man on the right side of United’s midfield. Beckham’s relationship with Ferguson deteriorated even further on February 15, 2003, when, in the dressing room following an English FA Cup loss to London club Arsenal, a furious Ferguson threw or kicked a boot that struck David Beckham over the eye, causing a deep cut that needed few stitches. The boot incident led to a transfer rumor involving David Beckham, with bookmakers offering betting odds on whether Beckham or Alex Ferguson would be first to leave Old Trafford.

Our partner site is Sports Logo History which is a community of sports logo enthusiasts who enjoys the history of each team’s logo history. In addition, we have added Sports News History to our sports history websites. 24/7 non-stop sports news that's worth knowing. Finally, the premier sports team marketplace for your favorite team or college with thousands of items for you to peruse at Sports Market History.