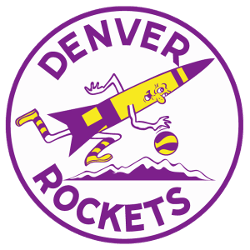 The original Denver team nickname was the Rockets after the owners shipping business. Their first logo is basically the companies logo. The Ringsby company logo is still on a building near the Pepsi Center, home of the Nuggets. The final logo for the Rockets before they changed nicknames to the Nuggets was a cartoonish logo of a rocket dribbling a basketball. The ABA did have a flare for their logos and the final Rocket logo does have some style.

Nickname
Rockets - In 1967, one of the ABA’s charter franchises was awarded to a group in Kansas City, Missouri headed by Southern California businessman James Trindle. However, Trindle was unable to find a suitable arena in the Kansas City area. League commissioner George Mikan suggested moving the team to Denver, Trindle moved his team to Denver as the Denver Larks, named after the Colorado state bird. Trindle sold a two-thirds controlling interest to Denver trucking magnate Bill Ringsby for $350,000. New owner Ringsby then renamed the team the Rockets, after his company’s long-haul trucks.

Who is the greatest Denver Rockets?