One of the biggest team sports to follow is ice hockey and there is no doubt that the NHL is the premier competition for hockey fans. But why is it so popular throughout the US and Canada in particular? You first have to look at the hard-hitting action, sense of drama, and fast-paced thrills it offers to fans.

People around the world also love to get involved with hockey because it is a great sport to bet on. There are not only plenty of games happening during an NHL season to wager on but lots of exciting markets to dive into. If you plan to start wagering on this sport, just remember to find the best NHL betting bonuses first. This will help you get access to matched deposit promotions or risk-free bets to take advantage of.

The last major reason why this sport is so widely followed is the many iconic NHL teams. When it comes to multiple Stanley Cup winners, you have to mention the Detroit Red Wings. Founded in 1926, they have won this trophy a massive 11 times to date and have some memorable performances to their name. But what is their history of Stanley Cup triumphs?

Early successes in the 1930s 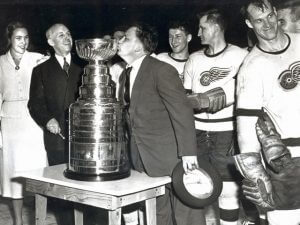 Their first victory came in 1936 and had them facing off against a strong Toronto Maple Leaf team. Detroit managed to prevail through and won the series 3-1 to take home their first-ever Stanley Cup win.

Not content with this, the team then came back the following year and won the 1937 edition. This series of games had them taking on a New York Rangers team that was competing in their fifth finals. Although this was a tight affair, Detroit eventually came out on top 3-2 to win a consecutive Stanley Cup. The Red Wings 1936 and 1937 Stanley Cup wins still live long in the memory to this day.

It is perhaps the one-sided annihilation of the Bruins in 1943 which explains why people class the Red Wings as the most thrilling Stanley Cup winners in NHL history. They won this best of seven series 4-0 and really dominated the team from Boston. A strong Detroit team never looked in trouble and goalie Johnny Mowers even shut out Boston in the final two games of the series. With legends like Sid Abel in good form too, this was a finals win which really impressed me.

The 1950s lead to more success for the Red Wings 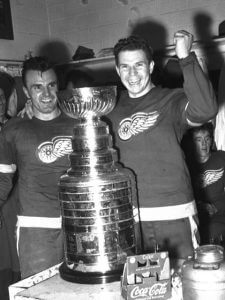 The 1950s proved to be a great decade for the team and led to them enjoying multiple Stanley Cup wins. While the 1950 win was a close thing, the team had enough to overcome the Rangers 4-3 eventually. 1952 was a much easier affair for Detroit, as they won with a 4-0 shutout of the Montreal Canadiens. This series resulted in the Red Wings not only stopping the Canadiens from scoring twice but also only conceding once in their other two games.

Both these teams met again in 1954 to compete for the trophy. Although the Red Wings won the opening game 3-1, the series went all the way to game seven. Detroit player Tony Leswick scored a deflected overtime goal to hand them the win. 1955 led to the team winning their fourth Stanley Cup of the decade, with another triumph over the Canadiens. This Red Wings team had an in-form Gordie Howe and Ted Lindsay to fire them to victory.

Although they felt unbeatable in the 1950s, the team would not dazzle fans with a Stanley Cup win again until 1997. The Red Wings ultimately came out on top that year and became the first team to win the trophy with fewer than 100 points earned during the regular season until 2009. On a roll, the team from Detroit made it to the finals again in 1998 and won 4-0 against the Capitals. With legendary coach Scotty Bowman in charge, top pros like Steve Yzerman and Sergei Fedorov were on fire.

In 2002, the team won once more to claim their 10th Stanley Cup, with elite defenseman Nicklas Lidstrom standing out. The last Stanley Cup win for Detroit came in 2008 and they put on a great performance to wow supporters. Clinching the series 4-2, Redwings flyer Henrik Zetterberg emerged as the series MVP.

The sheer number of times the Red Wings have been to the Stanley Cup finals and the many times they have won it shows they are top-class NHL performers. While the Canadiens might have won more Stanley Cups overall, the way Detroit has played when bringing home the trophy 11 times has left an indelible mark on hockey fans worldwide.