There's no denying that the best NFL comebacks rank among the biggest games played in the history of the NFL. Ultimately, fans love underdog stories, especially in NFL betting and the top comeback victories usually come at the very end of the game.

That makes some of these comebacks among the most exciting and memorable NFL games in history.

We compiled the most amazing NFL comebacks in history. In other words, the biggest losing positions a team has overcome to the most incredible wins we've ever witnessed.

We rank the best NFL comebacks objectively, regardless of which team the fans of each team prefer. 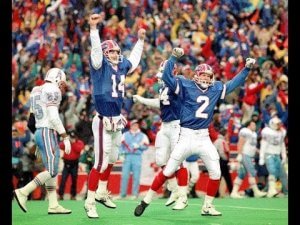 It would be an excellent comeback in normal circumstances, but since it happened in the playoffs, it's even more impressive.

The Bills football team had lost their last two Super Bowls and needed to play in the 1992 Wild Card game after finishing second in the AFC East.

The team lost their starting quarterback and fell behind 35-3 after the 3rd quarter in this game. But in the second half, Frank Reich threw several touchdowns passes, including three to Andre Reed.

In the fourth quarter, the Bills took the lead only to have the Oilers tie it. The Bills eventually won the game 41-38 in overtime to return to the Super Bowl.

At 38-10 in the third quarter, the Chiefs had their eyes set on one of the ugliest, meanest wins in NFL history.

But Andrew Luck demonstrated why he was such a talented NFL player, even though he was still in his early career days. In the second half, he passed five touchdowns, including a 64-yard scoring strike to T.Y. Hilton, giving the Colts a 45-44 victory despite the game looking like it was over.

In what universe would you ever rule Joe Montana out?

At halftime, when the Saints were leading 35-7, the 49ers weren't safe despite a season that finished with an impressive 6-10 record.

Talented Montana started the comeback with an invigorating touchdown run and a nice pass to Dwight Clark.

The 49ers won 38-35 in overtime after scoring 31 straight points. It was a harbinger of things to come for Montana and the 49ers, who went on to win the Super Bowl the following year, kicking off an empire in San Francisco.

It's the Bills' second-best comeback in franchise history. Buffalo was down 26-0 to the Colts, giving them a tough journey but enough time in the second quarter.

Todd Collins proved himself up to the task, with some assistance from Antowain Smith, who scored three of his 12 carries. The Bills eventually overcame a 26-point deficit to win 37-35. 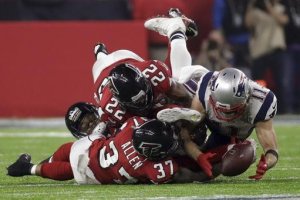 The Super Bowl LI clash between these teams would go down in Super Bowl history as the greatest comeback/collapse.

The Falcons took a 21-3 halftime lead and stretched their early lead to 28-3 in the 3rd quarter.

Tom Brady, on the other hand, proved why he can never be counted out.

The shocking part is that the Patriots didn't start their comeback in the game until late in the 3rd quarter and missed the PAT when they got the touchdown. However, that didn't stop Brady and James White from scoring the match drawing touchdown in the closing minutes of standard and the match-winning touchdown in added time, handing the Patriots a 34-28 victory and a career regret for the Falcons.

It's crucial to remember that until the late 1990s, the Buccaneers were not very good. Although they led 28-3 going into the fourth quarter, the game was far from over.

In the closing 15 minutes, the Cardinals and quarterback Neil Lomax regained some life and scored four consecutive touchdowns, two of which were caught by J.T. Smith. The Buccaneers' collapse was somewhat predictable, but the Cardinals' comeback was stunning.

Brian Hoyer, on the other hand, was not about to quit.

Late in the second quarter, the Browns scored a touchdown to give them some sense of hope. In the fourth quarter, Hoyer delivered two touchdown passes to Travis Benjamin, giving the Browns a 29-28 victory. However, it was a shocking blocked punt, approaching a safety early in the 4th quarter that proved to be the game-winner and aided Cleveland's comeback.

Comebacks are not common in NFL and it is even rarer for them to happen at Super Bowls or play-offs where there is much at stake for both teams. We have mentioned the greatest NFL comebacks in history which sent shocks to NFL fans all over the world.
Do you think we missed any comeback? Let’s have your opinion!