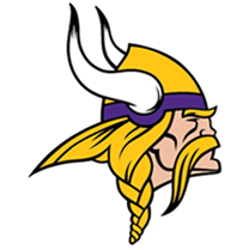 The Minnesota Vikings are an American football team based in Minneapolis, Minnesota. The Vikings joined the National Football League (NFL) as an expansion team in 1960, and first took the field for the 1961 season. The team competes in the National Football Conference (NFC) North division; before that, the Vikings were in the NFC Central, and before that they were in the NFL's Western Conference Central Division. The team has played in four Super Bowl games, but lost each one. The team plays its home games at U.S. Bank Stadium in the Downtown East section of Minneapolis.

Nickname
Vikings - Bert Rose, Minnesota’s general manager when it joined the NFL in 1961, recommended the nickname to the team’s Board of Directors because “it represented both an aggressive person with the will to win and the Nordic tradition in the northern Midwest.” The expansion franchise also became the first pro sports team to feature its home state, rather than a city, in the team name.

Who is the greatest Minnesota Vikings?