There is no question that the Pittsburgh Steelers are one of the most storied franchises in the history of the NFL. The franchise is the oldest franchise in the American Football Conference.

The franchise was officially founded on January 8th, 1933. Originally, they adopted the same name as their city’s major league baseball team.  They were known as the Pittsburgh Pirates. Media within Pittsburgh resorted to calling the team “The Rooneymen” so they wouldn’t be confused with the baseball team. 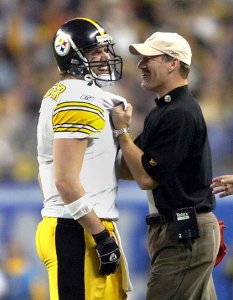 The team would get off to a rocky start in terms of success. They never finished over .500 in the 1930s and would struggle during the early-to-mid 1940s due to player shortages resulting from World War II. The Steelers’ first playoff appearance took place in 1947. However, they would not enjoy much success in terms of playoffs and/or championship before the NFL merged with the AFL.

Noll had a knack for making excellent draft choices. He would draft “Mean” Joe Greene in his first season as head coach.   Joe Greene would go on to be one of the greatest players in the history of the Steelers. The key to the Steeler’s success in their championship years was their iconic defensive line known as the “Steel Curtain”. “Mean” Joe Greene was one of the anchors of that defensive line along with players such as L.C Greenwood, Ernie Holmes, and Dwight White.

In 1970, Noll would draft Terry Bradshaw at quarterback and cornerback Mel Blount. Both would go to have legendary careers that would lead them to the Pro-Football Hall of Fame. Chuck Noll would draft future Hall-of-Famers Jack Ham and Franco Harris in 1971 and 1972, respectively. In 1974, Noll would have the greatest draft in the history of football. Noll would draft four Hall of Famers (Lynn Swann, Mike Webster, John Stallworth, and Jack Lambert) in the same draft.

Many of the iconic Steeler players during the 1970s would retire during the early part of the 1980s.  As a result, the Steelers were largely inconsistent during that decade.

In 2007, Mike Tomlin would become the first African American head coach in the history of the Pittsburgh Steelers. Like his predecessors, Tomlin maintained the consistent record of stability and success that has defined the Steelers.

A common denominator for the Steeler’s success over the past 18 seasons is QB Ben Roethlisberger. Nicknamed “Big Ben”, he has won two Super Bowls as quarterback of the Steelers. He has thrown for over 60,000 passing yards and 396 total TDS.   He has a regular-season record of 156-74-1 and has a playoff record of 13-9.

There is no doubt that the Pittsburgh Steelers are one of the premier franchises in NFL History. They are tied with the New England Patriots for the most Super Bowl titles in history. Given their level of consistency and stability, the Steelers will most likely remain competitive for the foreseeable future and build on their impressive legacy.