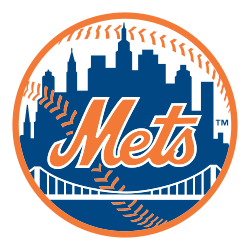 History of the Mets

One of baseball’s first expansion teams, the Mets was founded in 1962 to replace New York’s departed NL teams, the Brooklyn Dodgers and the New York Giants. The Mets’ colors are composed of the Dodgers' blue and the Giants’ orange, which also comprises the outer two bands of the New York City flag. During the 1962 and 1963 seasons, the Mets played their home games at the Polo Grounds. From 1964 to 2008, the Mets’ home ballpark was Shea Stadium. In 2009, they moved into their current ballpark, Citi Field.

Nickname
Mets – Team officials asked fans to choose a nickname from among 10 finalists when New York was awarded an expansion National League franchise in 1961. The finalists were Avengers, Bees, Burros, Continentals, Jets, Mets, NYBS, Rebels, Skyliners, and Skyscrapers. The team received 2,563 mailed entries, which included 9,613 suggestions, and 644 different names. Mets was the resounding winner, followed by two nicknames that weren’t among the team’s 10 suggestions: Empires and Islanders. When major league baseball expanded in 1962, the old name was revived in the form of the Metropolitan Baseball Club of New York, otherwise known as the New York Mets. “Met” is a common short form of “Metropolitan”, as in “The Met” for the Metropolitan Opera; or “MetLife” for the Metropolitan Life Insurance Company.

Who is the greatest New York Mets?