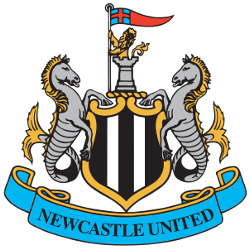 History of the Newcastle United FC

Newcastle United Football Club is an English professional football club based in Newcastle upon Tyne, that plays in the Premier League – the top flight of English football. The club was founded in 1892 by the merger of Newcastle East End and Newcastle West End. The team plays its home matches at St James' Park in the center of Newcastle. Following the Taylor Report's requirement that all Premier League clubs have all-seater stadiums, the ground was modified in the mid-1990s and currently has a capacity of 52,305.

The club has been a member of the Premier League for all but three years of the competition's history, spending 89 seasons in the top flight as of May 2021, and has never dropped below English football's second tier since joining the Football League in 1893. Newcastle has won four League titles, six FA Cups, and a FA Charity Shield, as well as the 1968–69 Inter-Cities Fairs Cup and the 2006 UEFA Intertoto Cup, the ninth highest total of trophies won by an English club. The club's most successful period was between 1904 and 1910 when they won an FA Cup and three of their League titles. Their last major domestic trophy was in 1955 (though their last major trophy was in 1969) and more recently the club has been League or FA cup runners-up on four occasions in the 1990s. Newcastle was relegated in 2009, and again in 2016. The club won promotion for the first time of asking each time, returning to the Premier League, as Championship winners, in 2010 and 2017.

Nickname
The Magpies
Newcastle United are also known under several nicknames, including "The Geordies" and "The Toon Army," but their official nickname is "The Magpies." The famous black and white kit is what inspired their most common nickname to date.

Who is the greatest Newcastle United FC?