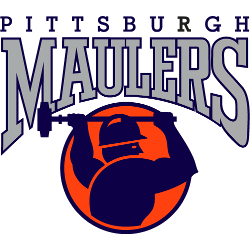 The Pittsburgh Maulers were a team that competed in the 1984 season of the United States Football League. Their most prominent player was first pick overall in the 1984 USFL draft, running back Mike Rozier of Nebraska, who won the Heisman Trophy, collegiate football’s most prestigious individual award.

Nickname
Maulers – A name-the-team contest yielded the nickname "Maulers," after the sledgehammer-wielding workers in steel foundries.

Team’s Final Outlook
DeBartolo was a strong believer in the USFL’s original spring football concept, and he knew the Maulers could not hope to go head-to-head against the Steelers. A move to Cleveland, closer to DeBartolo’s home in Youngstown, was quickly ruled out; even without the daunting task of competing with the Cleveland Browns to consider, it is not likely that Cleveland fans would have accepted a refugee from Pittsburgh. As a result, just a week after the vote to move to the fall, DeBartolo folded the franchise without so much as a press conference.

Who is the greatest Pittsburgh Maulers?