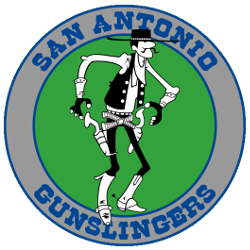 The San Antonio Gunslingers were a professional American football team based in San Antonio, Texas that played in the USFL in 1984 and 1985. Owned by oil magnate Clinton Manges, the team played its home games in Alamo Stadium and its colors were kelly green, royal blue, silver and white. Rick Neuheisel was the team’s quarterback and only recognizable name.

Nickname
Gunslingers – Refer to men in the American Old West who had gained a reputation of being dangerous with a gun and had participated in gunfights and shootouts.

Team’s Final Outlook
A month after the season, Commissioner Harry Usher had seen enough, and gave Clinton Manges an ultimatum–make restitution for the team’s debts in 15 days or lose the franchise. When this didn’t occur, the Gunslingers became the only USFL franchise to be revoked.

Who is the greatest San Antonio Gunslingers?