There are many great head coaches that have passed through the NFL and have had great success.

However, there are few head coaches in recent years that have had the success of Andy Reid.

Reid has been involved in the football coaching space for nearly 40 years.  After working one year as a graduate assistant at his alma mater Brigham Young University,  Andy Reid spent.

He would spend the next nine years as an offensive line coach for four different universities (San Francisco State, Northern Arizona, UTEP, Missouri)

In 1992, Andy Reid's first NFL coaching gig was with the Green Bay Packers.  Andy Reid was an assistant offensive line and tight ends in coach from 1992-1996.   He was on the coaching staff of the Packers squad that defeated the New England Patriots 35 -21 to win Super Bowl XXXI.  Mike Holmgren was the head coach of the Packers at the time.

After that, Reid would move on to another coaching role with the Packers as quarterbacks coach and assistant head coach from 1997-1998.

While there are no Canadian NFL teams, NFL betting sites are still massive amongst Canadian fans and bettors. 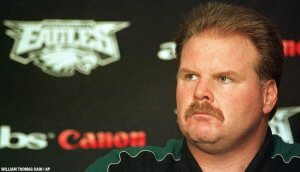 Andy Reid would break into the head coaching ranks of the NFL when he was hired in January 1999 by the Philadelphia Eagles.  Andy Reid secured the job when he showed up to his interview with a sizable book detailing how he would run the team.

In Reid's 1st season, the Eagles would go 5-11.  During that year, the Philadelphia Eagles would begin the Donovan McNabb era at the QB position.

In his 2nd season, the Eagles would finish 11-5 and would make it to the divisional round.  Next season, Andy Reid was named the executive vice president of football operations for the Eagles.   Thus, Andy Reid was the head coach of the team and has the final say on all football matters.

From 2001-2004, Andy Reid would lead the Eagles to four consecutive NFC Championship game appearances.  After losing the first three NFC Championships, Reid would finally breakthrough in 2004 as the Eagles would beat the Atlanta Falcons 27-10 to reach Super Bowl XXXIX.  Unfortunately, they would fall short of the New England Patriots.

Andy Reid had mixed results until the end of his coaching tenure in Philadelphia.  His team would make the playoffs four times (2006,2008,2009,2010) in his last eight seasons in Philadelphia.  His best season was in 2008. During that season, he would lead the Eagles to the NFC Championship game.

Reid had a regular-season record of 130-93-1 during his tenure with the Eagles.

Andy Reid would have the Chiefs in the playoffs in 8 out of the 9 seasons that he has coached.

In 2018, Mahomes took the league by storm by throwing 50 TDS and a QB rating of 113.8. Andy Reid would guide his young superstar to the AFC Championship game against the New England Patriots.  However, they would fall short.

In 2019, Andy Reid would finally lead the Mahomes-led Kansas City Chiefs to a Lombardi Trophy with a 31-20 win over the San Francisco 49ers.

Currently, Andy Reid holds a regular record of 102-41-0 as a coach with the Kansas City Chiefs.

Andy Reid is the only coach in NFL history that has at least 100 wins with 2 different teams.

Andy Reid won the NFL Coach of the Year award in 2002.

Andy Reid's legacy can certainly be seen in the success of his coaching tree.   11 of his former assistants have become coaches in the National Football League.

Two of his former assistants (Doug Pederson and John Harbaugh) would end up winning Super Bowls with the Baltimore Ravens and the Philadelphia Eagles respectively.

Andy Reid was named to the Philadelphia Eagles' 75th-anniversary team.   Based on his success, there is no doubt that Andy Reid will wind up in Canton, Ohio as a member of the Pro Football Hall of Fame.