It is highly unlikely that one will need a pro essay writing service to try and summarize the career of legendary coach Tom Landry. Tom Landry will go down as one of the most legendary coaches and football figures in the NFL. His accolades are absolutely numerous, yet well-deserved. In this piece, we will examine the life and legacy of Tom Landry.

Tom Landry was born in Mission, Texas on September 11th, 1924. He was one of four children. Tom Landry played as a quarterback and punter for Mission High School.

Originally, Tom Landry attended the University of Texas at Austin to study industrial engineering. However, he would leave after one semester to serve during World War II as a member of the U.S Army Air Corps. During his career in the military, he completed over 30 combat missions over the course of six months.

After Landry completed his military career, he would play college football for the University of Texas.

In 1948, Tom Landry would be drafted in the 12th round by the New York Yankees in a league known as the All-America Football Conference. One year later, the league folded.    However, Tom Landry was previously drafted by the NY Giants in the 1947 NFL draft. Thus, the Giants exercised their previous draft rights and drafted Landry in a league dispersal draft.

Landry was a punter and also played in the secondary during his 7 yr career. He led the league in punting yards twice. He also has 32 interceptions and ten fumble recoveries during his career.

However, Landry's calling to be a coach was birthed during his playing days.   At one point, his head coach Steve Owen called him to explain the nuances of a defensive strategy and how it would stop an opposing team's offense. This led to Landry being in a player/coach role with the Giants during the last two seasons of his career.

Tom Landry would be hired by the Dallas Cowboys to be their first coach in franchise history. After a terrible first season, Landry would improve his team to the point where they would make it to the NFL Championship game. Even though the Cowboys didn't win, the best was yet to come. 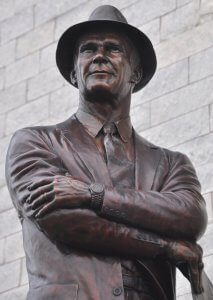 From 1970 to 1982, Landry would lead the Cowboys would appear in the NFC Championship ten times within that timeframe.

Tom Landry also had one specific type of wardrobe whenever he coached. He always wore a suit. However, he hardly coached a game without his trademark fedora hat.

Unfortunately, the Cowboys would miss the playoffs in four out of the final five years of Landry’s coaching tenure. In 1989, Landry was let go by then-new owner Jerry Jones. One year after he was let go by the Dallas Cowboys, the city of Dallas honored Tom Landry by throwing a parade. Tom Landry called it “the most exciting day of his life”.

It is clear that Landry influenced other coaches. Tom Landry had a couple of very notable assistant coaches in his coaching tree.   The late Dan Reeves was in Tom Landry’s coaching staff before having a successful coaching career in which he coached 3 Super Bowls and won over 200 games. Additionally,  Mike Ditka was an assistant for nine years before a successful coaching tenure that included leading the 1985 Chicago Bears to a Super Bowl title.