When thinking about legendary coaches, there are a few that immediately come to mind. Nick Saban, Coach K, Pat Summitt, Bill Belichick, and much more pop up. In the baseball world, Tommy Lasorda is among the biggest names in the sport.

Lasorda’s legacy in Los Angeles runs deep and often goes unnoticed in terms of historical value. His time managing the Dodgers and impact on baseball is one to be celebrated. Here is some more information about Lasorda’s time as the Los Angeles Dodgers manager.

Before we can dive into Lasorda’s managing career, it is important to have some context about how he got there. 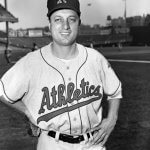 NEW YORK, NY - 1956: Picther Tommy Lasorda #23 of the Kansas City A's poses for a portrait prior to a game in 1956 against the New York Yankees at Yankee Stadium in New York, New York.
Tom Lasorda5601
1956 Kidwiler Collection/Diamond Images

Lasorda was born and raised in Pennsylvania and burst onto the professional baseball scene in 1945 when he signed with the Phillies. He took a break to serve in the military a few years later. Some success on the mound led him to the Dodgers. Although he was not quite a star, his legacy with the organization started in 1949.

Five years later, he made his Major League debut with the Brooklyn Dodgers. His time in Brooklyn was short-lived because he was traded to the Kansas City Athletics a couple of years later. Shortly after, his playing days were over and his tenure in the Major Leagues as an athlete did not go quite as planned.

It should be noted that the Dodgers moved from Brooklyn to Los Angeles in 1957. Lasorda’s legacy started in Brooklyn, but he would mostly be known for his presence in LA later on.

After retiring from playing in 1960, Lasorda spent the next five years as a talent scout for the organization. Despite his playing days being over, his knowledge about the game still had a place to show itself.

Once he realized that he could make a bigger impact on the game than scouting, his coaching career started. In 1966, Lasorda became the manager of the minor league Ogden Dodgers. After two years there, he moved to the Triple-A Spokane Indians. His success in the minor leagues propelled him back into the Majors.

An opening popped up with the Los Angeles Dodgers, so Lasorda became the third base coach in 1973. He spent a few years getting himself acquainted with Major League management before having the opportunity to run a program of his own at the highest level. The head coach at the time was Walter Alston who ended up being inducted into the Baseball Hall of Fame after retirement.

That retirement came in 1976. Over two decades were spent with the Dodgers, so when he parted with the team, whoever would be next had some big shoes to fill. The next man up was Lasorda. For the first time in his life, he had the opportunity to run a baseball team on the world’s biggest stage. This was paired with following up a super successful manager to bring a lot of pressure into Lasorda’s start.

Although he technically coached the final four games of the 1976 season, the real start came the following year. He achieved an impressive 98-64 record that year which set the standard high for what Lasorda would bring to the table. The Dodgers would go on to win the NL Pennant that year but ended up losing in the World Series to the New York Yankees.

That impressive start was followed by yet another NL Pennant winning performance from the Dodgers in 1978. They beat the Philadelphia Phillies in the Championship Series yet again and also lost to the Yankees in the World Series, again. It is interesting that the NLCS and World Series were identical in the amount of games won and who ended up on top. 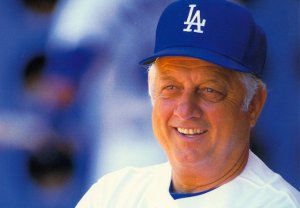 These first two years really catapulted Lasorda into the top pool of new managers. The next two were fairly stagnant as the Dodgers failed to make the postseason again until 1981. If you don’t already know, 1981 was a really interesting season because a player's strike forced the season to be cut in two halves.

Despite the tough circumstances and immense distractions, Lasorda led the Dodgers to his first World Series Victory as he avenged his losses against the Yankees. This would be the first of two titles he would hold during his tenure in Los Angeles.

His legacy with the Dodgers was starting to transition from consistency to success as winning records and going into the playoffs was apparent from the beginning.

Lasorda’s next success came in 1983 when he won the NL Manager of the Year honors. This was a big deal as it was his first of two in Lasorda’s career. The second came in 1988.

His final World Series title came in 1988 when his Dodgers posted a 94-67 record. Lasorda strung together a number of winning records after that, but there was no more deep postseason success after 1988.

Retirement looked a little strange for Lasorda. Right after his final game in 1996, Lasorda had a heart attack. Thankfully, he checked himself into the hospital before it got too serious. He officially retired about a month later and took a Vice President role with the Dodgers.

Lasorda never really left the game of baseball. Even after 20 years of coaching in the MLB, Lasorda never took too much of a backseat. He was always involved in the game. In 2000, Lasorda led the U.S. national team to a gold medal at the 2000 Summer Olympics in Sydney, Australia. Even when a heart attack led him away from coaching, he was brought right back and didn’t miss a beat.

Tommy Lasorda’s impact on the game of baseball and the city of Los Angeles is rivaling those of other greats across sports. His legacy is ingrained in Dodgers’ lore and will forever be a token of that franchise. Unfortunately, the Hall of Fame coach passed away on Jan. 7, 2021, but his memory and legacy will live on forevermore.