It is approaching 30 years since the Premier League was formed, replacing the Football League First Division and opening up commercial opportunities that have taken football in England to new levels.

The English top-flight is the most-watched league on the planet, and with the countless entertaining games we have witnessed over the years, there is no wonder why.

Many of the game’s greatest ever players have graced the Premier League, and it has resulted in a long list of epic match-ups that will never be forgotten.

Below, we have narrowed it down to the five best games in PL history. 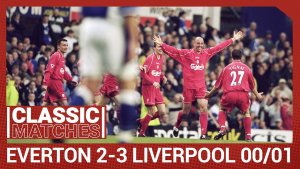 2000 - 2001 was a year to remember for Liverpool, who won three trophies, but arguably the most extraordinary victory of the season for them came in a competition they didn’t win.

It was as feisty a Merseyside derby as you had come to expect, with 12 bookings in total and a red card for Reds midfielder Igor Biscan, but there was plenty of goalmouth action, none of which was more dramatic than Gary McAllister’s free-kick winner from all of 44 yards out.

The Scot lined up the set-piece in stoppage time and looked set to deliver a cross into the box, but instead, he caught Everton goalkeeper Paul Gerrard out and struck the ball accurately into the bottom corner.

This was undoubtedly the goal that set Liverpool on their way to a sensational end to the campaign.

Occasions like this are what made Upton Park so special. A packed stadium for an all-London clash with huge implications for the hosts, and one of the best atmospheres ever seen in the Premier League.

Winless in 10, the Hammers were rock bottom coming into the game and time was running out if they were to escape the drop.

First-half goals from Mark Noble and Carlos Tevez set them on their way, but Spurs fought back in the second period and were level on 63 minutes.

An 85th minute Bobby Zamora header looked to have won it for Alan Curbishley’s team, but a Dimitar Berbatov had other ideas as he netted a delightful free-kick four minutes later.

Then, chasing a winner, West Ham left themselves shorthanded at the back, and Paul Stalteri of all people came up with the decisive goal, right in front of the away end.

Fortunately for the then-devastated home supporters, the Irons did manage - despite being huge underdogs on all betting sites - to produce the most unlikely of turnarounds and stayed in the Premier League on the final day. 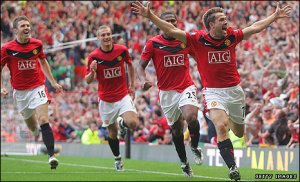 We could have chosen several Manchester derbies, as there have been various big ones in terms of both significance and drama.

But the most breathtaking installment of this fixture has to be the seven-goal thriller that occurred during the 2009 - 2010 season.

It marked Tevez’s return to Old Trafford after he had made a controversial move from United to City, and the Argentine was involved in the Sky Blues’ first-half equalizer.

Darren Fletcher scored twice in the second half, either side of a Craig Bellamy strike that meant it was 3-2 heading into the dying embers.

The Welshman pounced on a Rio Ferdinand mistake to make it 3-3 on 90 minutes, but in "Fergie Time," Michael Owen came up with his best moment in a United shirt and sent the stadium into a frenzy.

This game just missed out on the number one spot in this list of the top five PL matches, but what can’t be denied is that this fixture produced the most memorable goal in the league’s history and one that probably won’t be topped.

With six games left in the campaign, City was eight points adrift of Manchester United, but five consecutive victories - including a 1-0 success over their biggest rivals - meant that their destiny was in their own hands on the final day.

But that didn’t mean it would be straightforward against the struggling Queens Park Rangers, who themselves had a relegation fight on their hands.

Pablo Zabaleta gave City the lead at the break, but the visitors found themselves in front midway through the second half, despite Joey Barton’s red card.

Edin Dzeko made it 2-2 two minutes into injury time, but the final whistle at the Stadium of Light soon followed, and as United had beaten Sunderland 1-0, City needed another.

Step forward, Sergio Aguero, who latched onto Mario Balotelli’s one and only Premier League assist and fired home to hand City the title in the most surreal manner. 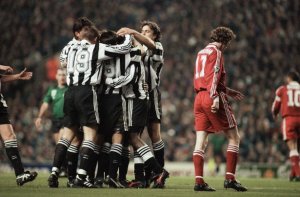 Plenty of other fixtures ended 4-3 before this one, and lots more will finish with the same scoreline, and perhaps even with a last-gasp winner, but none will match the sheer intensity, frenetic pace, and end-to-end nature of this all-time classic.

It took less than two minutes for Robbie Fowler to break the deadlock, but the lead didn’t last long, as goals from Les Ferdinand and David Ginola put the Geordies up 2-1 after a quarter of an hour.

Fowler’s 55th-minute equalizer was quickly wiped out by Faustino Asprilla’s effort, but Stan Collymore made it 3-3 with 23 minutes to go.

Then came one of the most famous goals and renowned pieces of commentary of all time in the Premier League.

Legendary Liverpool duo Ian Rush and John Barnes combined to set up Stan Collymore, and while Martin Tyler yelled ‘Collymore closing in!’ and the Kop went wild, Newcastle boss Kevin Keegan hung his head in disbelief as the advantage in the title race was handed to Manchester United.

Our partner site is Sports Logo History which is a community of sports logo enthusiasts who enjoys the history of each team’s logo history. In addition, we have added Sports News History to our sports history websites. 24/7 non-stop sports news that's worth knowing. Finally, the premier sports team marketplace for your favorite team or college with thousands of items for you to peruse at Sports Market History.