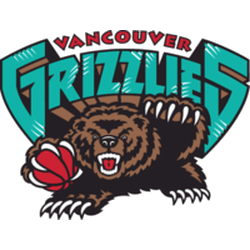 History of the Grizzlies

The Vancouver Grizzlies were a Canadian professional basketball team based in Vancouver, British Columbia. They were part of the Midwest Division of the Western Conference of the National Basketball Association (NBA). The team was established in 1995, along with the Toronto Raptors, as part of the NBA’s expansion into Canada. Following the 2000 – 2001 season, the team relocated to Memphis, Tennessee, United States, and is known as the Memphis Grizzlies. The Grizzlies played their home games at General Motors Place for the entirety of their 6 seasons in Vancouver.

Nickname
Grizzlies – When Vancouver was awarded an expansion franchise in 1994 to begin play the following season, the team’s owners had tentative plans to name the team the Mounties. The Royal Mounted Canadian Police and fans alike objected, so team officials resumed their search for a name. The local newspaper sponsored a name-the-team contest, which club officials monitored before choosing Grizzlies, an indigenous species to the area, over Ravens.

Who is the greatest Vancouver Grizzlies?