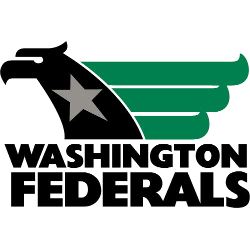 History of the Federals

The Washington Federals were a professional American football team that played in the United States Football League in the mid-1980s.

The franchise was the worst in the USFL in terms of both gameplay – a combined record of 7-22-0 – and attendance during its two seasons in Washington, prompting the move to Orlando.

In March 1984, with the Federals failing on the field and at the gate for a second straight season, Bernhard decided to sell the franchise. Florida real estate developer Sherwood "Woody" Weiser agreed in principle to buy the Federals for $5.5 million and made plans to relocate the team to Miami as The Spirit of Miami for the 1985 season. In anticipation of the deal, the USFL executed a lease agreement for the Spirit to play at the Miami Orange Bowl. At a meeting on May 9, 1984, the USFL's team owners unanimously approved the sale of the Federals to Weiser.

Shortly thereafter, hospital magnate Donald Dizney, who had been a minority owner of the Tampa Bay Bandits before briefly joining Weiser's group, stepped in to end Bernhard's suffering. Dizney quickly reached a deal on the same terms that Bernhard had reached with Weiser. In a deal agreed to on August 28, 1984, and announced on September 1, 1984, Dizney bought the Federals, moved them to Orlando, Florida, and renamed them the Orlando Renegades.

Nickname
Federals – Being located in Washington D.C. where the Federal Government resides, the natural nickname for the team is the "Federals."

Team’s Final Outlook
Bernhard was in a desperate situation, as he knew that he stood no chance going head-to-head with the Redskins. A few days later, Tampa Bay Bandits part-owner Donald Dizney stepped up and ended Bernhard’s suffering. Dizney bought the Federals, moving them to Orlando and renaming them the Renegades.

Who is the greatest Washington Federals?