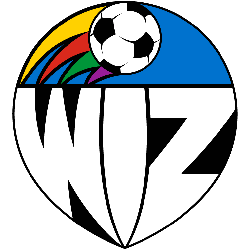 The Kansas City MLS franchise was founded by Lamar Hunt, who was also the founder of the American Football League, the Kansas City Chiefs, the United Soccer Association, and Major League Soccer. The Kansas City Wiz played their first game on April 13, 1996, defeating the Colorado Rapids at Arrowhead Stadium, 3–0. The Wiz players included Preki, Mo Johnston and Digital Takawira, and were coached by Ron Newman. The team finished third in the Western Conference (fifth overall) in 1996 regular season with a 17–15 record, qualifying for the first ever MLS Playoffs. In the 1996 conference semi-finals, the Wiz beat the Dallas Burn in three games, winning the final game in a shootout, before losing the conference final to the LA Galaxy.

Nickname
Wiz – In the beginning, the MLS franchise in Kansas City wore perhaps the most abstract of the abstract noun names in vogue for the new league — the Wiz. Within a year, however, legal action from New York-based electronics retailer Nobody Beats the Wiz led the Lamar Hunt-owned franchise to alter course slightly and become the more conventional Wizards.

Who is the greatest Kansas City Wiz?