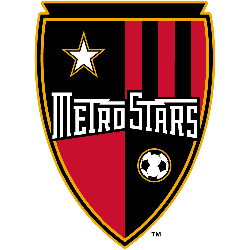 History of the MetroStars

When the league began to play in 1996, it was expected that the MetroStars would quickly become the league's dominant team. This expectation never materialized. Despite famous players and high-profile coaches, the team never seemed to click together. The team's first home game against the New England Revolution proved to be a harbinger of things to come. Former Juventus defender Nicola Caricola inadvertently flipped a cross into his own net in the dying minutes to hand New England a 1–0 win in front of 46,000 fans.

The resulting play would later be dubbed the "Curse of Caricola" by fans to explain the team's inability to come through with a domestic trophy in their history. Firmani left after eight games (3–5) and was replaced by former Portugal coach Carlos Queiróz, who did no better than even (12–12) the rest of the season. The team made it into the playoffs, only to lose to eventual champions D.C. United.

Nickname
MetroStars - The club's original name was Empire Soccer Club, which gave birth to the name of the team's largest supporters' group, Empire Supporters Club.[citation needed] The team's original owners were John Kluge and Stuart Subotnick. The name MetroStars was chosen in reference to Metromedia, the media company founded by Kluge, after Nike's original suggestion "MetroFlash" was rejected. The owners also considered but rejected buying the rights to the name "Cosmos."

Who is the greatest MetroStars?