As the only Canada-based team in the NBA, the Toronto Raptors enjoy a unique place in the history of basketball’s premier competition. 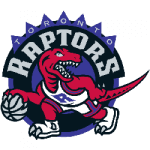 The Raptors can be found in the Downtown area of the city, where they play their games at the Scotiabank Arena – the home they share with the NHL outfit Toronto Maple Leafs.

At the time of writing, Toronto Raptors are placed in the Eastern Conference of the NBA, and they face some of the best teams in the competition in the stacked Atlantic Division – Philadelphia 76ers, Brooklyn Nets, New York Knicks, and the Boston Celtics.

Despite being in such great company, the Raptors have enjoyed plenty of success in the past – not least being crowned NBA champions in the 2018 - 2019 season, which remains their sole Finals victory to this day.

The Formation of Toronto Raptors

While some NBA teams have been around for decades, the Toronto Raptors are fairly ‘new’ in the grand scheme of things.

They were created in 1995 as part of the NBA’s expansion into Canada, with the Raptors joining the Vancouver Grizzlies (who have since moved to Memphis, Tennessee) as expansion franchises.

There was a plan to name the team the Toronto Huskies, which would have been a nod to the outfit that played the first-ever NBA game against the New York Knickerbockers way back in 1946.

However, concerns that the branding of the team would be confused with that of the Minnesota Timberwolves led the team’s founders to launch a national competition to find a moniker. 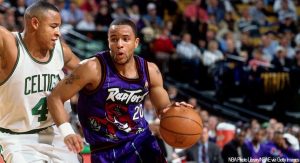 All manner of weird and wonderful names made it to the shortlist – the Tarantulas, the Terriers, and the Hogs among them, but in the end, it was Raptors that was selected – reportedly due to the success of the Jurassic Park movie that had been released just a year or two prior.

Their new jersey was designed, and Isiah Thomas was installed as the Raptors’ first-ever General Manager in readiness for their opening game in the 1995 - 1996 campaign.

Where Do the Toronto Raptors Play?

For many years it was called the Air Canada Centre, but a commercial rebranding in 2018 saw Scotiabank take on headline billing.

The stadium, found on Bay Street in the city, is owned by the Maple Leaf Sports & Entertainment Group, which is responsible for a number of sporting assets in Toronto. Nearby points of interest include the Rogers Centre, Yonge-Dundas Square, and the HQ of the Canadian Gaming Association, which ensures all online casinos in Canada are adhering to their stringent regulation.

The arena holds 19,800 fans when at full capacity and opened its doors for the first time in February 1999.

As is the case with many expansion franchises, the Raptors struggled in their early years as an NBA outfit.

They didn’t make it to the playoffs in each of their first four seasons, but their performances in the Eastern Conference slowly improved – thanks largely to the efforts of trade signing Vince Carter (more on him later).

A few more years in the doldrums followed before the Raptors enjoyed their finest season yet in 2006 - 2007 – bolstered by the off-court team of Sam Mitchell and Bryan Colangelo, who won Coach and Executive of the Year respectively, they won the Atlantic Division for the first time.

By the time 2013-14 came around, the Raptors were able to establish themselves as a key player in the NBA – winning the Atlantic Division in six of the seven seasons that would follow. They lost the Eastern Conference final to the Cleveland Cavaliers in 2015 - 2016, but they wouldn’t have to wait too much longer for their first taste of silverware.

The 2018 - 2019 campaign was the finest yet for the Raptors. They triumphed in the Atlantic Division with an outstanding .707 win ratio, and that saw them highly seeded for the post-season. Orlando Magic was trounced in the first round of the playoffs before their semi-final game with the 76ers went to a deciding seventh game – Kahwi Leonard, with time running out, threw a buzzer-beating two-pointer to secure a famous victory.

The good times continued. Toronto won the Eastern Conference Championship for the first time, defeating Milwaukee Bucks 4-2, and that set up their first appearance in the NBA Finals.

Would debut nerves get the better of them? Not a bit of it. They took on defending champions Golden State Warriors, but powered by Finals MVP Leonard, they would clinch the championship 4-2. As such, they became the first Canadian team in 25 years to win any of America’s four major sporting competitions and the first Canadian outfit in history to win the NBA Finals.

There have been many noteworthy performers throughout the Raptors’ short history, from Alvin Robertson – the first point-scorer in the Toronto jersey, to Damon Stoudamire, the first truly elite player to represent the Raptors.

At the time of writing, only five people reside in their Hall of Fame. Hakeem Olajuwon, Tracy McGrady, and Chris Bosh are the trio of players inducted, alongside former head coach Lenny Wilkens and visionary general manager Wayne Embry.

In the fullness of time, others will be considered legends of the Toronto Raptors’ rise from nowhere to NBA champion. Vince Carter was the one who almost single-handedly established the Raptors as a play-off contender rather than an also-ran, and you suspect it won’t be too long before he is inducted as well.

Others are rightly heralded as Raptors’ legends. Mitchell and Colangelo oversaw history for the franchise in the mid-2000s before former coach Dwayne Casey oversaw the next step in their genesis from solid outfit to genuine championship material.

The 2018 - 2019 campaign will forever remain one of the greatest in franchise history – the key figures responsible, including Leonard and Pascal Siakam, will always be fondly remembered north of the border.