Aaron Rodgers is without doubt one of the best quarterbacks ever to grace the NFL. The best in his position tend to have a lot in common – talent, leadership, toughness, and calmness under pressure.

Although he may not have won as many accolades as a rival and fellow future Hall of Famer Tom Brady, he does have a Super Bowl under his belt as well as three MVP awards over the years. 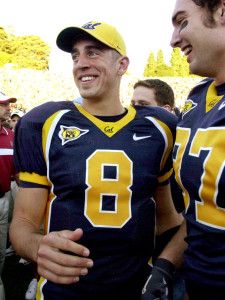 Will he add to that before he retires? Only time will tell, and who knows if he will stay with Green Bay until that day. But if he does, the Packers are well placed to mount a final challenge for one of the very best to play the game.

If you're ever contemplating backing the Wisconsin side to win a Super Bowl before Rodgers retires, it’s worth taking a look at how some of the top bookmakers make their predictions. FanDuel’s prices, for instance, are some of the most generous in the industry, and reading up on resources like a FanDuel sportsbook review goes a long way to understanding how they work and what they have to offer to their customers.

To appreciate everything Rodgers has been through in his football career, it's important to go back in time to where it all started for him.

Aaron Rodgers was born on December 2nd, 1983 in Chico, California. His father, Edward Wesley Rodgers, played football between 1973 and 1976 as an offensive lineman for the Chico State Wildcats. For a few years after graduation, his father was a member of the Twin City Cougars in Marysville, California. He won the Semipro National Championship in 1980, beating a team from the state of Wisconsin.

Aaron loved every sport growing up as a kid, including basketball, soccer, and baseball. But it was football where he excelled more than the others. His dad taught him the ropes and he also grasped Ed's competitiveness and passion from an early age.

Rodgers grew up following the San Francisco 49ers and was a huge fan of arguably the NFL's greatest quarterback, Joe Montana. He still remembers the anguish he felt like a nine-year-old when Montana left for the Kansas City Chiefs.

After Rodgers and his family returned to Chico in 1997, he was an ever-present quarterback for Pleasant Valley High, a school that's had some notable alumni over the years. He recorded an impressive 4,421 passing yards in two years and was consistently setting new records. 2001 saw him set a single-season record of 2,466 total yards. He graduated the following year.

Despite his heroics at Pleasant Valley, he suffered a lot more losses than victories. This led to him being overlooked for a long time as the big schools didn't tend to waste their time recruiting from those with a poor record. He wasn't that tall at the time either and was arguably too skinny to even be considered.

In fact, the only major program to show any interest in Rodgers was the University of Illinois. But he refused their offer and chose to play closer to home with Butte Community College. It was touch and go for a while at that time as he had seriously considered giving it all up for law school. Thankfully, he stuck with it.

2002 was the year Aaron started to really get noticed. He threw 26 touchdowns in his freshman year at Butte and won the NorCal Conference Championship with a side that ended up at number two in the national rankings.

It was Jeff Tedford who discovered the talent we all love and appreciate today. He was the head coach for the California Golden Bears at the time, and he was very surprised that someone of Rodgers' ability had not yet been recruited. He was able to transfer over to the University of California in Berkeley because of his impressive school record.

In 2003, he came back to haunt Illinois, the team he rejected a couple of years prior, by beating them in his first-ever start for the Golden Bears. He equaled the school record that year for 300-yard games with five. He also had the lowest percentage of passes intercepted at 1.43%, which was another record.

With a 10-1 record in 2004, the Golden Bears were overlooked for the Rose Bowl and edged out by Texas. They ended up playing Texas Tech in the Holiday Bowl, which was a game they were expected to win easily. But they lost. It may have been a good thing in hindsight as this defeat triggered Aaron Rodgers' decision to make himself eligible for the NFL draft.

Packers and the NFL 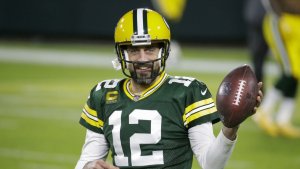 It was widely expected that Rodgers would be picked early after posting impressive numbers as a junior with Cal. He was fairly confident that he would end up being drafted to the team he supported growing up – the 49ers. However, they selected another quarterback, with Rodgers slipping all the way down to the 24th pick.

The Packers were the team that decided to take a chance on him as they were looking to replace legendary quarterback Brett Favre. That was never going to be easy, but it turned out to be one of the best drafts picks in NFL history. Just imagine where the 49ers would be if they chose Rodgers over Alex Smith that day?

After agreeing to a multimillion-dollar deal with Green Bay, Rodgers spent his rookie season as a backup to Favre. He got his chance soon after but was sacked twice and only completed two of seven passes.

He has to wait until 2008 before his transition to a starter began. It was the year Brett Favre announced his retirement and it opened the door to an illustrious career with the Packers. If you look back at their history with Rodgers, it's been a struggle at times, but everything fell into place in 2011 as they won the Super Bowl for the fourth time in their history.

In what has been an incredible career spanning nearly 20 years, here's what Aaron Rodgers has won during his time in the NFL:

The Wisconsin Legislature also declared December 12, 2012 (stylized as 12/12/12) "Aaron Rodgers Day" in honor of Rodgers whose jersey number in the NFL is 12. It's a fitting tribute to the future Hall of Famer.

He may only have one Super Bowl ring, but nobody can ever take that away from him. It would have been great to see Aaron Rodgers win more, but he will still go down as one of the greatest quarterbacks of all time.