Most exciting are the games in which your favorite team was losing but bravely turned the game and won. Whether it's for good or bad, we've all experienced it. The perfect atmosphere when we think we might have an uneventful day and at a blip, the tides turn. 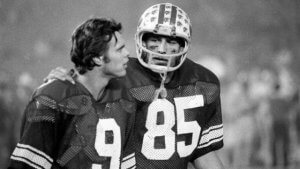 BYU had never won a bowl game before the 1980 Holiday Bowl. It looked as if that bad streak would continue with just about four minutes to go. The Mustangs scored a touchdown to extend their score to 45-25. However, the Cougars quarterback McMahon and his team weren't going down quickly.

With just a couple of plays left, a touchdown was scored by BYU. Also, they recovered an onside kick and moved back into the field. Scott then ran in from one yard away to finish the drive. It reduced the lead down to 45-39.

When SMU had one minute and 57 seconds left, they punted due to limited time. The Cougars had one last chance to cover the 41 with a few seconds to go after BYU’s Bill intercepted the punt.

After two passes in the game's final seconds, McMahon tossed an excellent pass to Brown, and he caught it to tie it up. Cougar fans call that game the Miracle Bowl because of BYU's extra point, which ensured the Cougars had an unexpected 46-45 victory.

In November 1984, Boston College trumped Miami with a 47- 45 scoreline, but it wasn't the Hurricanes' worst comeback – not even close.

The NCAA’s most historical comeback occurred two weeks earlier when Maryland overcame a 31-0 score at halftime to win 42-40. Frank Reich fueled a six-game scoring streak for Maryland. Maryland led 35-34 after Greg Hill scored from a 68-yard run in the last quarter.

The Terps scored again, but Miami wasn't done yet. The Hurricanes scored and attempted to tie the game with little time remaining. However, Covington stopped Bratton ensuring the victory and the incredible comeback.

The game appeared to be a typical Big Ten thrashing. The Northwestern squad established a 38-3 lead in the third quarter over a Michigan State club that came into Evanston on a four-game losing streak in October 2006. The rest, as they say, is history in NCAA Division I.

Michigan State could claw it is way back into the game with a pair of third-quarter touchdowns, but it still trailed 38-17 heading into the fourth quarter. Northwestern was on the verge of extending their advantage to 45-17 when C.J. Bacher was expertly intercepted towards the end zone by MSU. On Northwestern's next play, Michigan State's Devin Thomas blocked a punt, cutting the score to 38-24.

With 7:54 left, a 12-yard touchdown run by Drew Stanton trimmed the advantage to 38-31, and Drew’s excellent touchdown pass to Williams tied the match with 3:43 left. With 13 seconds left, Brett Swenson's 28-yard field goal won the game after Travis Key's interception. 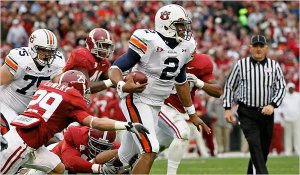 The Iron Bowl is always significant in Alabama. When it's played, the state comes to a standstill for about 3 hours as their most loved annual rivalry between Auburn and Alabama takes place. During this time, careers are formed and lost. Players like Auburn and Cam Newton will remember the Iron Bowl played in 2010.

Auburn came into the match with an impressive 11-0 record and a chance to clinch a spot in the national title. Alabama came in having a nice home-winning run (20 matches) but was playing spoiler with an unconvincing 9-2 match record. Alabama appeared to be on their way to cruise to a win early on, with a 21-0 early scoreline and a stunning 314-2 total yard advantage.

On the other hand, Newton was not going down without a fight as they trimmed the score to 24-14 via an excellent TD pass.

With 11:55 remaining, Newton's yard run pulled Auburn inside a field goal, and his pass caught by Philip handed Auburn the lead.

During his career, Joe Montana had a penchant for high-profile game comebacks with the 49ers. But this was nothing new for those who had watched him in college football. In the 1979 Cotton Bowl, Montana demonstrated his clutch ability.

The Cotton Bowl had played in cold temperatures due to Dallas being enclosed in the ice caused by a terrible ice storm, and Montana was affected. After three quarters, Houston had a score advantage of 34-12, and Montana's temperature had dropped to about a worrying 96 degrees, prompting staff to give him food to keep him warm.

The food worked magic. Montana led Notre Dame to an exciting 35-34 victory with a remarkable comeback in the last 7:37.

Everyone loves exciting games, and comebacks in any sport are usually its height. In the NCAA, comebacks are rarer, and that's why it makes waves when they occur. We have listed some of the most exciting comebacks in college football history, and we hope you enjoyed your read.