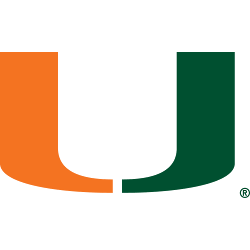 Miami Hurricanes colors are orange, green, and white. The school mascot is Sebastian the Ibis. The ibis was selected as the school's mascot because, according to university legend, it is the last animal to flee an approaching hurricane and the first to reappear after the storm, making it a symbol of leadership and courage. The school's athletics logo is a simple green and orange, color of an orange tree, letter "U." The school's marching band is the Band of the Hour.

Nickname
Hurricanes - When The U was founded in Coral Gables, Florida in 1925, the school needed a nickname to go along with its NCAA sports team. Apparently, some wanted to go with a “local flora or fauna,” but Porter Norris of the 1926 team said none of the players would go for that.

The story says Norris suggested the Hurricanes because the opening game of the season had been postponed due to a storm. It has also been scene as a logical nickname due to the storm often hitting the South Florida coast.

Who is the greatest Miami Hurricanes?