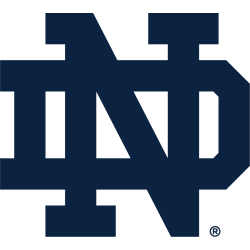 History of the Fighting Irish

The Notre Dame Fighting Irish are the athletic teams that represent the University of Notre Dame. The Fighting Irish participate in 23 National Collegiate Athletic Association (NCAA) Division I intercollegiate sports and in the NCAA's Division I in all sports, with many teams competing in the Atlantic Coast Conference (ACC). Notre Dame is one of only 16 universities in the United States that plays Division I FBS football and Division I men's ice hockey. The school colors are Gold and Blue and the mascot is the Leprechaun. It was founded on November 23, 1887, with football in Notre Dame, Indiana.

Nickname
Fighting Irish - Notre Dame competed under the nickname “Catholics” during the 1800s and became more widely known as the “Ramblers” during the early 1920s in the days of the Four Horsemen.

The most generally accepted explanation of the nickname is that the press coined the nickname as a characterization of Notre Dame athletic teams, their never-say-die fighting spirit and the Irish qualities of grit, determination and tenacity. The term likely began as an abusive expression tauntingly directed toward the athletes from the small, private, Catholic institution. Notre Dame alumnus Francis Wallace popularized it in his New York Daily News columns in the 1920s.

Who is the greatest Notre Dame Fighting Irish?