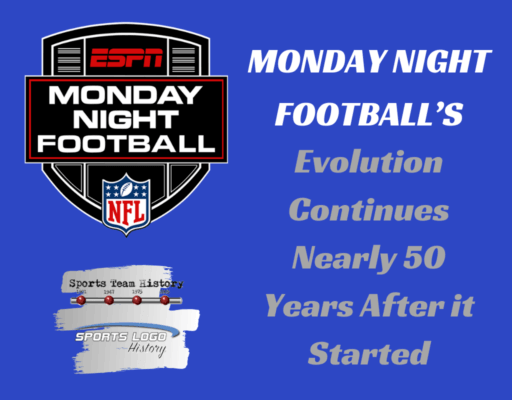 Original MNF producer Roone Arledge decided that since the game was being played in front of a prime-time network audience, he wanted some sizzle to go along with the steak that is the football game itself. Arledge doubled the number of cameras used, added more graphics, and expanded the commentary booth from two to three. Those three men would be Keith Jackson, Howard Cosell, and Don Meredith.

The first-ever Monday Night Football matchup between the defending Super Bowl champion New York Jets visiting the Cleveland Browns drew an absurd 33 rating (meaning that one out of every three televisions that were on were watching that game). 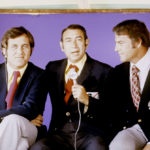 The following year, Frank Gifford took over from Jackson (who was ABC’s longtime college football play-by-play man). The trio would remain together for over a decade, with Cosell known for his oftentimes-bombastic statements and Meredith became famous for his catchphrases and one-liners, including “Turn out the lights, the party’s over.”

In the mid-1980s, Gifford would transition to an analyst role and give the play-by-play chair to Al Michaels. Dan Dierdorf was the third man in the booth, and these three were together for another decade.

The franchise struggled a bit after Michaels’ longtime analysts left. Boomer Esiason was used for a couple of years, and then with ratings sagging, comedian Dennis Miller was brought into the analyst role, along with Dan Fouts.

The Miller experiment lasted only two seasons, but the franchise regained its stride when ABC lured John Madden away from FOX in 2002. Michaels and Madden remained MNF’s two announcers until 2005, when the franchise was moved off-network television to ABC’s sports property, ESPN.

Michaels and Madden didn’t make the move to cable, as they instead joined NBC as they regained the rights to air NFL games – specifically a Sunday night game that would take MNF’s place as the marquee game of the weekend.

For years, teams would generally have to have a winning record the year before to qualify for a game on Monday night. That caveat didn’t carry over when the franchise moved to ESPN.

Mike Tirico, Joe Theismann, and Washington Post columnist Tony Kornheiser were the announcers for the debut season on ESPN, and the network tried to keep the entertainment factor of the show high by bringing celebrities like Arnold Schwarzenegger, Jimmy Kimmel, and Sylvester Stallone into the booth. 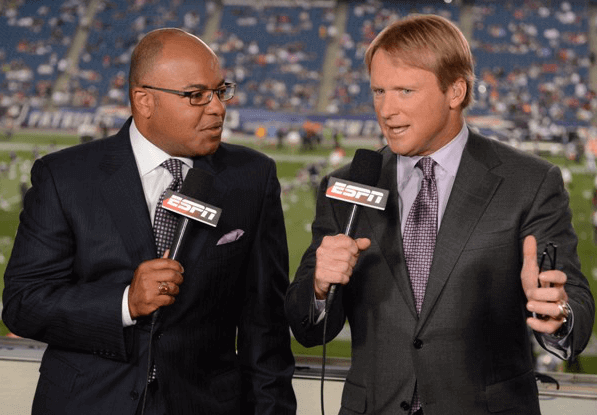 This aspect was a major criticism of MNF’s first year on ESPN. Theismann was also replaced by Ron Jaworski. In 2009, Kornheiser was replaced by charismatic former (and current) Oakland Raiders coach Jon Gruden. The booth was downsized back to two in 2011, with Tirico and Gruden becoming another iconic MNF duo. With Tirico’s departure to NBC, he was replaced by Sean McDonough, who never seemed to have the chemistry with Gruden that his predecessor did.

When Gruden returned to the sidelines in 2018, MNF was revamped again. Joe Tessitore was plucked from college football duty to become the play-by-play man, joined in the booth by Jason Witten. Booger McFarland was used as a second analyst, but instead of being in the booth, he was broadcasting from a moving cart on the sideline.

Going into this season, McFarland moves up into the booth to replace Witten, who called off his retirement to rejoin the Dallas Cowboys.