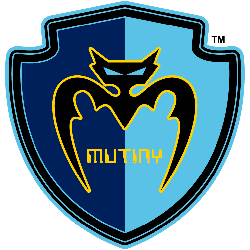 The Mutiny were established in 1994 and were owned and operated by MLS throughout their existence. They were successful in their first years of play, winning the first MLS Supporters' Shield behind MLS MVP Carlos Valderrama and high-scoring forward Roy Lassiter, whose 27 goals in 1996 remained the MLS single-season record until 2018. However, the team drew low revenues and attendance and could not find a local ownership group to take over operations from the league. In 2002, MLS folded the Mutiny as well as its other Florida-based team, the Miami Fusion.

Nickname
Mutiny - Inspired by the futuristic visions of video games, the logos and type suggest a mega-high tech, ominous force on the field. (The logo’s designers will even point out that the character isn’t controlling the ball with its feet, but with its mind—soccer reaches the fourth dimension.) Not your typical pirate story.

Who is the greatest Tampa Bay Mutiny?