One of the many reasons why millions of people love sport is because of how unpredictable it can be, even at the highest level. Professional sporting events do not come much bigger than the Super Bowl and we have witnessed several upsets in the history of the game.

Perhaps the biggest upset in Super Bowl history came in 2008 when the New England Patriots were on course to make history. They enjoyed a 16-0 regular season and New England Patriots defeated Jacksonville Jaguars and San Diego Chargers to enter the Super Bowl with an 18-0 record for the season. They were only one win away from becoming the first team to win the Super Bowl with a 19-0 record. New England Patriots faced New York Giants at the University of Phoenix Stadium, Arizona with history at their fingertips. However, New York Giants had other ideas, despite the fact they went into the playoffs as a 10-6 Wild Card team. A David Tyree catch was the standout moment from the game and will go down in history as one of the most memorable plays in Super Bowl history as the New York Giants caused a massive upset by winning 17-14. 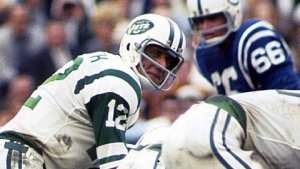 Next, we go back to 1969 and the Super Bowl meeting between New York Jets and Baltimore Colts at the Orange Bowl, Miami. The game was special in its own right as it was only the third AFL–NFL Championship Game in professional American football history and the first to officially be labeled the Super Bowl. The Baltimore Colts were the clear favorites to win the game and the New York Jets went into the game as the 19½ points underdog. Baltimore Colts lost only one game during the regular season and won their NFL Championship Game 36-0 against the Cleveland Browns. A few days before the game, New York Jets quarterback Joe Namath made an appearance at the Miami Touchdown Club and guaranteed his team would cause an upset. He delivered on his promise and New York Jets defeated Baltimore Colts 16-7, with Namath controlling much of the game.

If you think you have what it takes to back an underdog to win the Super Bowl, why not have a wager? There are always plenty of free bets for the Super Bowl available in the lead-up to the event and you could be walking away richer having backed an upset victory.

With such an impressive amount of unpredictable, mesmerizing games that captures fans from around the globe, regardless of which team they support, it’s easy to understand why the Super Bowl remains America’s favorite sports event.