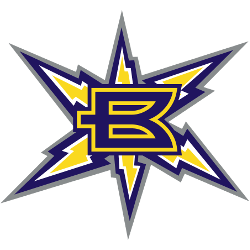 The Thunderbolts played in the Eastern Division, with the Chicago Enforcers, Orlando Rage and the New York/New Jersey Hitmen. They finished the only year of XFL play – 2001 – in last place with the worst record in the league, at 2-8.

The Thunderbolts played their home games at Birmingham's legendary Legion Field. They were coached by Brooklyn-native Gerry DiNardo, a former star player at the University of Notre Dame, and previously head coach at Vanderbilt University and Louisiana State University. Following the collapse of the XFL, he went on to coach at Indiana University. One of DiNardo's assistants with the Thunderbolts was his predecessor at LSU, Curley Hallman.

The team's colors were purple, yellow, and white. Their logo was a stylized 'B' with six lightning bolts extending from it. On the teams helmets, the logo was placed at the front, instead of the customary position on each side, with only the upper three lightning bolts visible. The team was frequently referred to by fans and the media as simply the Bolts. Team merchandise almost always used the shortened Bolts moniker.

Allegedly, the league had originally planned to name the team the Blast; the XFL had named all of its teams with references to insanity and criminal activity, and the name "Birmingham Blast" likewise invoked images of the 1963 bombing of the 16th Street Baptist Church and of Eric Rudolph's 1998 bombing of a local abortion clinic, two tragic events in Birmingham history. As the league soon realized that such a name would have been in extremely poor taste, at the last minute the league changed it to "Thunderbolts," or "Bolts" for short. The team's logo is said to be the same one originally designed for the Blast. The Thunderbolts were unusual in that their nickname was benign.

While XFL players were encouraged to use nicknames instead of their last names on the backs of their jerseys, DiNardo banned Thunderbolts players from doing so.

After losing the opening game to the Memphis Maniax, the Thunderbolts posted wins over the Chicago Enforcers and the New York/New Jersey Hitmen. These would ultimately become the only victories the Thunderbolts would ever see. The Bolts would finish with a 2-8 record.

Birmingham went through all 3 quarterbacks during the season. Former Florida State quarterback Casey Weldon was signed as the starter. Former University of Alabama quarterback Jay Barker was signed as the backup, despite the crowds (averaging only 17,000 fans a game, second-lowest in the league) chanting his name during the home games. Barker would become the starter after Weldon injured his shoulder. Barker suffered a concussion in Chicago when he collided with Enforcers' cornerback Ray Austin while attempting a bootleg run on a broken play. He was replaced by third string QB Graham Leigh.

NBC dropped the XFL after the first (2001) season due to dismal ratings, and the league was disbanded shortly thereafter.

Nickname
Thunderbolts – The Thunderbolts is a team of comic book super villains and superheroes, as published by Marvel Comics.

Who is the greatest Birmingham Thunderbolts?