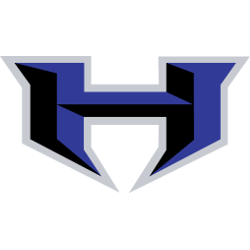 History of the Hitmen

This team was part of the failed XFL begun by Vince McMahon of the World Wrestling Federation and by NBC, a major television network in the United States. Its general manager was former Dallas Cowboys wide receiver, and New Jersey native, Drew Pearson.

They were part of the Eastern Division with the Birmingham Thunderbolts, Orlando Rage, and Chicago Enforcers. They finished in 3rd place with a 4-6 record. The head coach was former NFL assistant Rusty Tillman, who was not a fan of the league's gimmicks or personalities - specifically commentator Jesse Ventura, who called him "Gutless Rusty" on a regular basis, as he felt that Tillman's coaching style was too timid. Tillman, ever the professional, brushed off the jabs by Ventura and refused to respond. In the end, Ventura's attempts to goad him failed.

The Hitmen were one of the teams to play in the XFL's inaugural game. Tens of millions of viewers watched the Hitmen, who displayed a stunning lack of competence against the Las Vegas Outlaws in the contest (including a particularly ugly missed field goal and numerous miscues from starting quarterback and New York native Charles Puleri), lose 19–0. The Hitmen's poor performance in that game was a major factor in fan backlash against the league in the weeks that followed and a prime example of the league's failure to live up to expectations; the team benched Puleri in favor of Wally Richardson by Week 3 in hopes of salvaging the season.

Within the New York metro area, the Hitmen had a relatively strong fan following; their average attendance of roughly 28,000 fans per game was second-highest in the league behind the San Francisco Demons; attendance that seemed smaller since the cavernous Giants Stadium held over 79,000 fans at the time.

NBC dropped the XFL after the first season of 2001 due to dismal ratings, and the league folded shortly afterward.

Nickname
Hitmen – The name "Hitmen," which implies a hired criminal, was one of the icons of the XFL's short life and the butt of many jokes about the league (quips of teams such as the fictional "Kansas City Shoplifters" coined by Saturday Night Live, for instance). The team's secondary logo features the head of a football player wearing an old style leather football helmet.

Who is the greatest New York-New Jersey Hitmen?