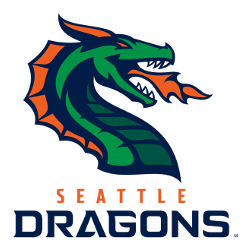 History of the Dragons

The Seattle Dragons are a professional American football team based in Seattle, Washington. The team was a franchise of the new XFL founded by Vince McMahon's Alpha Entertainment and plays its home games at Lumen Field in Seattle.

Seattle joins New York, Dallas, Houston, Los Angeles, St. Louis, Tampa Bay, and Washington, D.C. as the league's inaugural cities. Teams had 40-man active rosters and played a 10-week season. Vince McMahon said "the game will feature simplified rules for a faster pace of the game that should be complete in under three hours", and drawn from former college and NFL players.

The Seattle Dragons started to play on February 8, 2020, one week after Super Bowl LIV and hosted their inaugural home game on February 15, 2020.

Nickname
Dragons – The fire breathing dragon is the choice of the new Seattle XFL team.

Who is the greatest Seattle Dragons?